The Verdict On Men in Black International: Is It Worth Your Time And Money?? 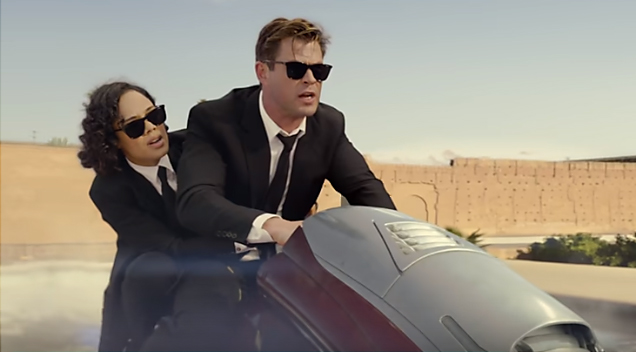 What do you do when your mega-hit, iconic franchise has used up all its big-name stars and gone as far as it can go? You have a movie in that SAME universe but with completely different stars to focus on. It worked with “Jurassic World”, still working for Harry Potter with the “Fantastic Beasts” series and now “Men in Black” is trying to make a comeback without Tommy Lee Jones and Will Smith with a whole new set of stars, aliens and locations, which of course explains the title: “Men in Black International.” Directed this time by F. Gary Gray, who is known for directing music videos, action sequences and the most recent “Fast Furious” franchise entry, “International” is an odd entry with a slightly off focus film that tries to have all the marks of the original trilogy…but lacks the heart and charm it once had.

After witnessing an alien encounter when she was a child, M (Tessa Thompson) dedicates her non-existent life to finding the alien monitoring organization and succeeds and is recruited by O (Emma Thompson) to join their ranks. She’s assigned to the London branch of MIB, run by High T (Liam Neeson) who partners her with Agent H (Chris Hemsworth); a reckless, shoot-from-the-hip wild card rebel who leaps far more than he looks. Their relationship is strained and complicated but it only gets worse when their work uncovers a dark truth about a new alien threat: there’s a mole within MIB and it’s up to M and H to identify the mole and stop him.

When I heard this director was known for stylized action sequences and previously working on “Fast and Furious” films, I had a pretty good idea what this movie was going to look like: all flash no substance, but a lot of good action scenes and great banter between Hemsworth and Thompson. Was I right? More or less, does that make it a bad movie? No…but it doesn’t make it a particularly great movie either…or a very memorable one. The idea of branching off to other MIB agencies around the world and exploring new agents in this universe is a good idea and an easy way to keep the franchise going. The problem is there has to be a solid story AND a solid partnership present and with “International,” it feels like we got just the scraps of both.

One of the best things all previous MIB movies had going for it was the awkward, brilliant comedy between Jones and Smith and while Thompson and Hemsworth are young and lively, they never feel like they accomplish that comedic chemistry; odd considering how well they worked together in “Thor: Ragnarok.” More time is spent on flashy space gun battles, rocket chases then learning to understand how these characters tick or exploring new alien species/characters. The alien spread here is a sad, far pathetic cry from the vivid imagination of Rick Baker’s alien creatures from the original trilogy. The only one who manages to be funny and endearing is Pawny voiced delightfully and amusingly by comedian Kumail Nanjiani.

Thompson has more fun here and is able to cut loose, though she never has as much fun as Hemsworth seems to be doing and both of their spirits fail to raise our own when their dialog feels so simplistic and lacking. Sometimes they play out like they each have their own idea how the joke or the connection is supposed to go and they just go with it regardless if anyone else is following it or understanding. It’s nice to see Liam Neeson and Emma Thompson in any movie, but even they fail to be used to their full potential. By far the worst flaw “International” suffers from is lacking a memorable and imaginative alien villain.

The MIB films have always produced excellent villains with unique designs and powers (even Serleena, the most hollow of all of MIB’s big bads is more memorable than this film’s foe). The mole element is executed poorly and sloppily; the shocking twist at the end can be seen coming a mile away and when it finally does happen, it’s handled just as generically and disappointing as the rest of the film did. Overall, “Men in Black International” had the potential, star power, and universe to be a successful spinoff entry, but due to a predictable plot, lame villain and mismatched chemistry, perhaps it’s best if everyone just neutralizes this movie out of our collective memories.