The Truth About Fat Freezing: Is It Right For You? 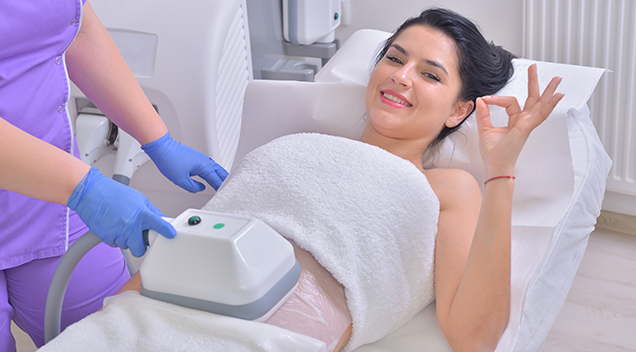 Is it sci-fi fantasy or can you really just freeze your way to the body you always wanted?

Imagine a quick, non-invasive procedure that could reduce stubborn areas of fat. It’s virtually painless, touted as safe, and has zero downtime. Sound too good to be true?

Meet Cryolipolysis. Also known as fat freezing or CoolSculpting. The fat in the area the patient wants to decrease is painlessly sucked into a wand-like, non-invasive device which then breaks down the fat cells with cold temperatures. The FDA approved procedure takes approximately one hour with many clients napping, working away on their laptop or iPad, reading or using their phone throughout the duration of the treatment. In the weeks after the treatment, your body naturally eliminates the frozen, dead fat cells (apoptosis) through your liver. People start to see results just a few weeks later. Three months later the area (which had been frozen for the hour or so long treatment) will have shrunk by 20-40 percent.

As a Doctor of Medical Aesthetics for twenty years, the science behind fat freezing stacked up to me. I knew that fat cells died from freezing a significant time before skin and other cells were affected, therefore the technology made sense. Once I saw the research results and the approval by the Food and Drug Association government agency, I knew it was a game-changer in the body sculpting arena.

I conduct both liposuction and Coolsculting procedures at Géniale. My decision for a substantial investment in Cryolipolisis is based on practical hands-on managing and following up on my patients treated by all other modalities. Coolsculpt is also only a fraction of the price of liposuction, starting at $400 per area from reputable providers – while liposuction costs several thousand.

I find that the results of CoolSculpting and liposuction are very similar. Both procedures are used to permanently remove excess fat from specific body parts such as the belly, back, thighs, arms, and chin, although neither is intended for weight loss.

The risks and side effects of Coolsculpting

CoolSculpting risks are rare and short-lived. The most concerning of the risks is PAH. Paradoxical adipose hypertrophy (PAH) is the unintended stimulation of tissue growth, following a treatment. Paradoxical tissue growth is a phenomenon observed occasionally with device-based therapies. For example, paradoxical hypertrichosis can occur after laser treatment for hair removal.) The phenomenon seems to be more common in male patients undergoing Cryolipolysis. When PAH presents after Coolsculpting, the treated area actually enlarges instead of decreasing.

However, PAH has a recorded incidence rate of less than 0.0051%. Which means that out of the 4 million procedures, only about 200 cases of PAH have been reported. PAH is treated by subsequent CoolSculpting procedures, although you may require laser treatment or liposuction if symptoms persist. Fortunately, PAH is highly treatable, and most patients are extremely pleased with their end results.Coolsculpting risks are higher if you opt to use DIY methods such as store-bought applicators. Doctors, dermatologists, and other CoolSculpting experts use professional-grade applicators. My decision to substantially invest in the “Cooltech” technology was based on my knowledge and experience when comparing it with other modalities on the market for body sculpting. I followed up on my patients after using other technology for body sculpting, Cooltech proved to be the most effective and efficient with the greatest customer satisfaction.

The expert also needs to be well trained to avoid the common side effects. For instance, a professional CoolSculpting doctor will always use a well-lubricated gel pad with their applicator to reduce (frozen) burn risk. The well-trained professionals will also understand body contouring and will ensure the applicator is placed on correctly to avoid unwanted changes in body contour.

Final Verdict: So what’s the actual truth about Fat freezing/CoolSculpting?

CoolSculpting remains one of the safest and most effective fat removal procedures (and subsequent skin tightening is a serious bonus). It has no reported debilitating effects and none that are even remotely life-threatening.

To minimize any of these risks, avoid DIY procedures with store-bought products. It’s imperative to choose a well-trained expert to administer your Coolsculpting procedure. Consult a CoolSculpting expert who will assess
whether you qualify as a CoolSculpting candidate.