The Verdict On Crawl: Is It Worth Your Time And Money?? 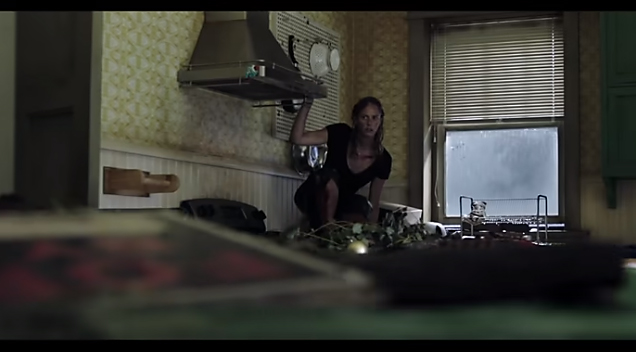 There’s something to be said about films with simple premises and simple setups that just lay the groundwork so simplistically, you’re best course of action is to sit back, watch and enjoy it without thinking too much. “Crawl” is a movie that throws a lot of common sense out the window, as well as realism, or maybe it doesn’t; I don’t know, the film’s situational crises is not something I have experienced but it’s a stressful plot that I think anyone would feel equally freaked out over if they were in it. It’s similar to “The Shallows” but nowhere near as well polished or executed, still, sometimes simple films produce quite complex feels…and thrills of course.

The story surrounds a category 5 hurricane hammering into the citizens of Florida, including pro swimmer Hailey (Kaya Scodelario) who receives a distressed call from her sister worrying about their father (Barry Pepper) who has not evacuated yet. She not only finds out her father is trapped in his home’s basement, which is rapidly flooding but becomes surrounded by a group of bloodthirsty alligators looking to make a meal out of her and anyone else in their way. Now Hailey and her father must battle the elements and find rescue quickly before the gators or the hurricane end their lives right then and there.

Like I said before, this is certainly not “The Shallows” quality we’re talking here. “Crawl” relies on environmental terrors and insatiable savage gators to jump scare the crap out of people and make every sequence feel tense and teeth chattering. It’s a survival story mixed with horror elements and it manages to balance both quite well. Though they are clearly demonized, it’s nice to see alligators as the ‘monster-of-the-day’ rather than another shark film after the disappointing “The Meg” came out. They make excellent predators that work into all kinds of fear-inducing situations and keep the main characters and the audience frequently on their toes. Despite a slight case of jetlag, the movie’s 2nd and last half kept throwing surprises left and right; keeping you guessing if this is how the movie ends or how could this situation change.

Speaking of change, it’s nice to see director Alexandre Aja (Piranha 3D, Horns, Mirrors) change his usual gorefest approach for something more emotionally driven and centered. Don’t get me wrong, “Crawl” is not for the faint of heart and displays some well expected gruesome death scenes that grow increasingly more savage and brutal with each new victim. But it’s worth noting that at the core, “Crawl” is not a body count film but an emotionally charged one that focuses on the strained relationship between Hailey and her father. Each new challenge Mother Nature throws at him provided them with new opportunities to grow and rely on one another; embracing their situation and learning about their past and who they have become as people.

The good news is it allows for some genuinely emotional moments and people we invest in enough to not wish bloody death upon them. The bad news is this downgrades every other character to background gator fodder. No one else is important or developed, so we feel nothing when they get chomped and it makes it painfully obvious who is going to make it and who isn’t. “Crawl” isn’t trying to be anything than what it obviously is; having said that, it still does everything it’s trying to do well and generates some legit claustrophobic/animal terror and never dials the tension back; keeping it consistently on edge and our characters moving and talking and never losing its steam.

This film works more than you’d think it would and while it’s not as deep as one would hope it would be; there isn’t much where the film disappoints. Overall, “Crawl” is simple, sometimes obvious and makes it easy to tell who will live and who will become gator chow, however it still tells a tight, intensely well-acted and developed relationship/story that pleases horror and thriller fans exceedingly well. It’s worth your time if your nerves can stomach the suspense and gore, surprisingly recommended viewing.