The Verdict On Scary Stories To Tell In The Dark: Is It Worth Your Time And Money?? 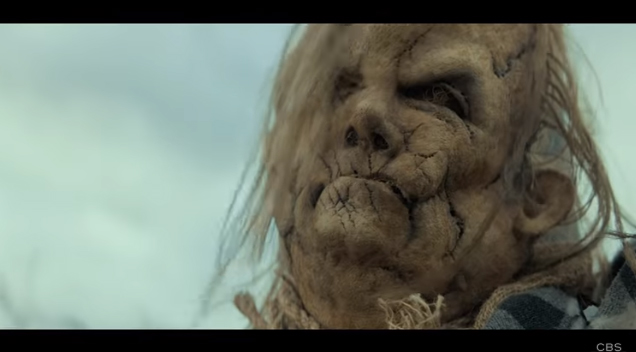 Nostalgia is a powerful thing, just like fear. Sometimes we hear, see or read things that leave a powerful impact on us and affects us for many years; giving us fond or intense memories of something that was strong enough to stay with us over a lifetime. Alvin Schwartz was a writer who became famous for terrifying an entire generation of children with his horror kid’s book series “Scary stories to tell in the dark.” While the stories themselves were typical spooky fanfare to give kids chills and thrills, it was the illustrations created by Stephen Gammell that truly left an impact on a generation of youth. The twisted, disturbing monster imagery inspired many nightmares and interest; so much so that acclaimed director Guillermo Del Toro aided in producing a horror fueled amalgamation of multiple of Schwartz’s stories into one film.

Set in 1968, the town of Mill Valley has been forever haunted by the eerie legend of Sarah Bellows; a tormented girl who used her madness and misery to create unforgettable scary stories about monsters. Stella (Zoe Margaret Colletti) winds up in the Bellows Mansion on Halloween night and comes across the actual book of “scary stories” written personally by Sarah Bellows. Unfortunately, she learns quickly that the stories in Bellows book are coming to life and all of her friends have unwittingly become the stars of these scary stories…including their horrific fates. Now Stella has to stop the book before it writes any more stories about her and her friends by unearthing Sarah Bellow’s secrets as well as the hidden secrets of her own hometown.

“Scary Stories,” similar to “Goosebumps,” has always been better known for its epic covers and iconic monsters/imagery rather than its story material. And also like “Goosebumps,” the director and writers decided to make a movie out of a series of stories by combining multiple ones in a single movie and tying them all together through a plot device that can make them all work. “Scary stories” the movie follows the books very closely: that’s a good thing but also…sometimes not always a good thing. I can say unequivocally that the production crew and makeup artists nailed the monsters without a hitch. They are disturbing, unsettling, creepy and a delightfully wicked sight to behold. They don’t pop out via jump scares but mostly just lumber, meander closer and closer to our cast; making you squirm in your seat and it’s a great reaction.

The period setting is an interesting choice and it gives a distinct look and feels to the movie to set it apart from other tweeny horror films, it also plays into the backgrounds of one of the main characters though I won’t say what. The cast themselves are actually likable enough and the writing keeps their dialog sharp, relatable and funny to keep you invested in whether or not they will survive this film. The problem ultimately falls with what the film does…or rather…what it doesn’t do. “Scary Stories” carries itself like it’s the darker, more mature kids book series and gives you the impression it’ll be bolder and more daring to push the envelope and embrace the intensity of its darker horror elements…but it doesn’t.

The film feels like its holding back, watering down potentially disturbing and shocking scenes/events because it can’t go past a PG-13 rating. It’s creepy, that’s for sure but I can’t help but feel this could have been so much MORE if it spent more time being risky with its scares instead of playing them at a safe distance. “Goosebumps” may have been light-hearted and definitely wackier and kid-friendly but at least it knew how to play to its source material’s strengths, have fun with it and go all out with every monster and title at its disposal. “Scary Stories” offers too few stories to mix with and the 13 rating de-fangs a lot of its scarier opportunities with its monsters and scare scenes.

Overall, “Scary stories” really got me amped for something unnerving but turned out to be just another scary flick to screen on TV at Halloween; forgotten the next day. The monsters are incredible, I applaud the practical effects and the unique setting/sense of humor definitely helped, but the lackluster character development and lack of proper bite didn’t. I can’t help but wonder how much more horrifying and amazing this would have been if Del Toro was directing it instead of producing it. All in all, a decent film with great monsters but average acting/characters and a missed opportunity to be the scary big brother book series they made themselves out to be but ultimately didn’t.