One On One With Max Talisman: The Director Of The Upcoming Romantic Comedy “Things Like This” 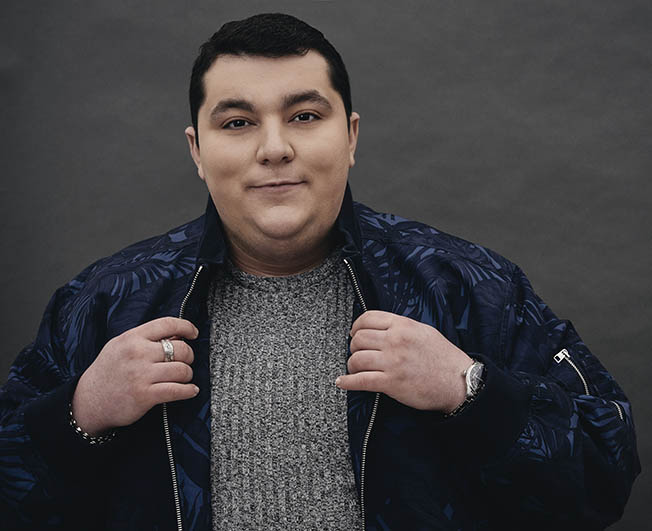 Actor, singer, writer, and creative force, Max Talisman is set to make his directorial debut in his upcoming romantic comedy, THINGS LIKE THIS. The film stars Charlie Tahan (Netflix’s “Ozark”), Eric Roberts (THE DARK KNIGHT) and Miles Tagtmeyer (DISNEY DESCENDANTS: SCHOOL OF SECRETS), and tells a story of two guys who fall in love and while everything seems to align for them to be together, they begin to question fate as they encounter an obstacle.

Growing up in Washington DC, Max started performing in 3rd grade. He participated in musical theatre, including productions at the Musical Theatre Center (MTC), one of the leading performing arts education organizations for young people in the Washington DC area. It was the moment when he played the 2nd lead role in the through-composed musical, “Caroline, or Change” that he felt theatre was his calling.

When his senior year of high school began, Max made the courageous move to NYC to follow his passion for theatre. He joined the Broadway Artists Alliance, a professional training academy for promising young musical theatre performers right in the heart of New York City. After living in the big apple for 5 years, he decided to make his way to Hollywood, California. He’s appeared in The Orchard’s SUPER DARK TIMES, TBS’ “Search Party” and NBC’s “The Blacklist”.

Overcoming Legg-Calvé-Perthes disease (LCPD) and anxiety, this rising star doesn’t let these challenges prevent him from enjoying his life. He has a keen love for sports and when he’s not watching games on TV or at stadiums, he keeps up with the standings/scores on teams such as the LA Lakers, the Washington Redskins and the Baltimore Orioles. He is also an avid tennis and ping pong player, crediting Serena Williams as his role model.

Consumed by wanderlust with a curiosity for cultures, Max has traveled all around the world from Argentina to Zimbabwe, Austria, Germany, Italy, England, Iceland, Greece, Africa, and Costa Rica.

With a life of travel, art, and hobbies, Max hopes to incorporate all his current and future life experiences in all he does. He hopes to be a role model for the LGBTQ community and break stereotypical barriers/roles in Hollywood.

StarCentral Magazine recently caught up with Max to discuss his upcoming projects and here’s what went down:

How and when did you catch the acting bug?

When I was 3 my Saba (grandfather in Hebrew) took my twin sister and me to see Cats. I was immediately hooked. I just knew right then and there that being an actor was all I could ever do.

Can you tell us how you were inspired to develop THINGS LIKE THIS?

I think it’s a huge part of the job of an actor, and a writer to stay up to date with what’s happening in the film and television world. So, I watch a lot of content that comes in the pipeline, and basically what I noticed is that there’s no gay content that speaks to my demographic. When I say my demographic, I don’t only mean young gay millennials, but I mean all millennials. I wanted to write something that everyone I know can relate to, while still being a gay romantic comedy. Therefore, that’s really where the idea for THINGS LIKE THIS was born from.

What was the process of writing the film like for you?

Honestly, it’s been a joy. From the beginning, I had a very clear vision of how I wanted to attack the story, and so I never felt tripped up or blocked. The first draft was finished in a week. Obviously, there have been innumerable edits, but at the end of the day, the core story and heart has remained the same from the beginning. Writing it was never a struggle though. All the ins and outs of making a movie are the more challenging part. But writing it has truly been the biggest joy.

Who will be the demographic audience for this movie?

As I stated before, I wanted to write a movie that appeals to everyone. A lot of past and current Queer films have a campy nature to them. And yes, those movies have a great level of fun to them for a very specific gay demographic. I wanted to write something that was universal in its appeal. So, I’m going to quote another great romantic comedy, TRAINWRECK, when I say our demographic is “every-f*cking-one.”

Do you relate to the main character? What are your similarities and/or differences?

I think when you write something like a movie, there are pieces of you in every character. But obviously, the role I wrote for myself has a lot of me in there. We have similarities. We both say everything on our mind with no filter, we’re both creative people, and we both have a close-knit family of friends. But we have a lot of differences as well. I would hope my life is a little more together than his is. And I’m more willing to let people in than he is, at least initially. But I also have many similarities and differences with the other lead role. I really believe that all of the characters are strange variations on a part of my brain if that makes sense. 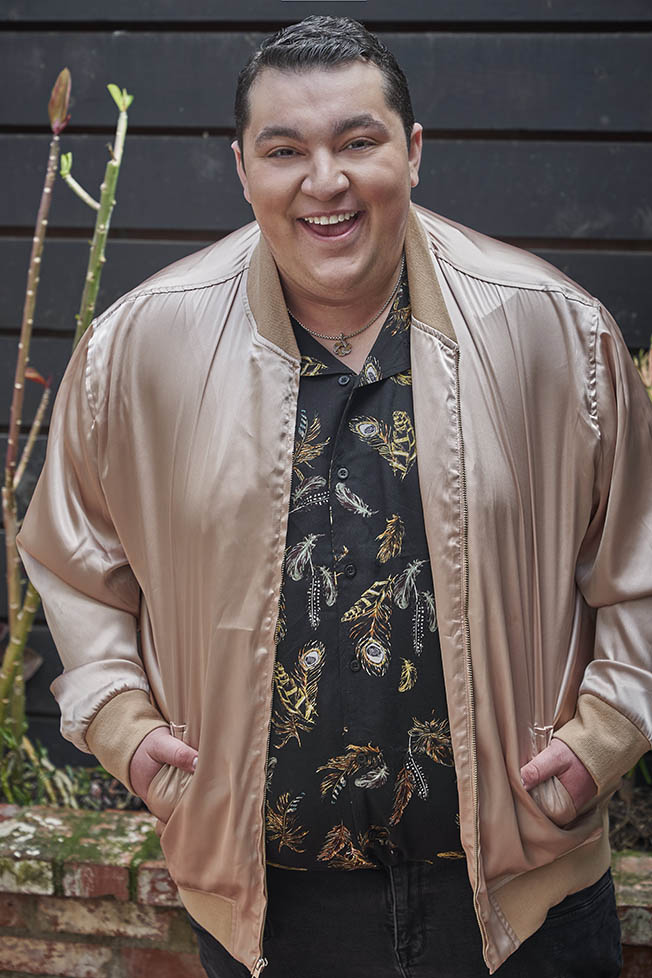 What will be the biggest challenge in directing this film?

I think the biggest challenge will be finding the balance between being the actor, the writer, and the director. I have a strong belief in myself that I can achieve it, but I want to find the right balance. As an actor, you never want to feel that another actor is directing you. So I want to approach the scenes I’m acting with other actors in, and directing, as more of a collaboration. My background is very stage-based, which is incredibly collaborative and I believe that’s the best way to approach most art. So I want the actors, and crew on set to always feel like their voices are being heard, and I want the set to feel like the set of a team, not just my set.

Besides yourself, what director would you like to work with in the future?

There are so many. Number one is probably Christopher Nolan. I just think he’s such an innovator. And I know saying him is almost a cliche for an actor, but there’s a reason why. He makes actors want to work with him because he’s so brilliant. And when I met with Eric Roberts, to discuss Things Like This, we talked for about thirty minutes just about what working with Chris was like for him. And Eric has worked with a lot of stars. So to have that kind of impact on an incredibly accomplished actor like Eric, you have to be one of the very best. I would also love to work with Adam McKay. His background is so drenched in comedy, but I think his most recent films about politics and finance have been incredibly game-changing, and I think he’d be a very exciting director to work with as an actor.

If you could play any character in this movie besides the lead, who would it be?

I love the part of Margie so much. And I know that’s a gender switch, but that would be such a fun role. To play one of the most powerful players in New York Entertainment, and just a bad bitch, in general, would be so much fun. She was also one of my favorite parts to write. She plays with a lot of different tones too. So yeah, definitely would be an incredibly fun experience playing her.

I would probably ha to say Super Dark Times. The entire process of that film, from filming to finally being released on Netflix, was the greatest journey I’ve had so far. Working with Kevin Phillips and the entire team was such a beautiful gift. And to get create a deep friendship with Charlie Tahan, and now have him be joining THINGS LIKE THIS, I’m so grateful for that. Just every part of that film. I just felt like we created something timeless, and something that I believed in deeply as well. To have my first feature be something that I was so incredibly passionate about, is something I will be forever grateful for.

I like that you didn’t ask you who the best people were. Interesting is a great adjective. I think the most interesting people are people who challenge you and stimulate you in every sense, but especially intellectually. When I appeared on NBC’s The Blacklist, I was incredibly blown away by James Spader. I gained such deep respect for him. He understands filmmaking and storytelling on such a deep level. He can tell you why Camera 2 should actually point in another direction, instead of this one. By that, I just mean that he’s so in tune with everything on set. He knows everyone’s names, he connects with people. And then when it’s time he does incredible work on screen. Like who wouldn’t want to perform with someone like that? He really was marvelous.

I’m fairly active! I love Instagram, so I use that the most. But I’m a big fan of Twitter too! I would say those are probably my most used social media sites right now. Still don’t have a TikTok. Might at some point. I’ll keep you updated! All my social media’s are @TheMaxTShow! Please follow along.

Instagram is definitely my favorite. I love it because I think it’s so simple to use and easy to reach an audience. Also, a really great way to connect with your fan base. So I definitely like Instagram the most of all social media.

Well once we wrap filming on Things Like This, I’ll begin developing my next film. The script is already written, and I won’t say much, but I will say it’s a Queer Horror/Comedy, and I’m absolutely in love with what I have so far! I’ll also be working on other film and TV projects. I love telling other peoples stories just as much as telling my own. I think it’s such a privilege to bring someone else’s scripts to life. So that’s why I still love being able to be an actor in other projects that I haven’t written. Personally, I don’t know. Maybe get a boyfriend? Any Australians looking for a cute Jewish guy hit a boy up.

What do you consider beautiful and why? Food, because it’s food. And filmmaking because it’s how I bring beauty into the world.

What haven’t you done yet that you wish you could? Seen Serena Williams win her 24th grand slam! I am waiting with all of you. WE BELIEVE IN YOU SERENA!

Complete this sentence: “If I had no fear, I’d…” Finally, try beets.

What is the one “flaw” you wouldn’t change about yourself? My love of chocolate. It’s just too good.