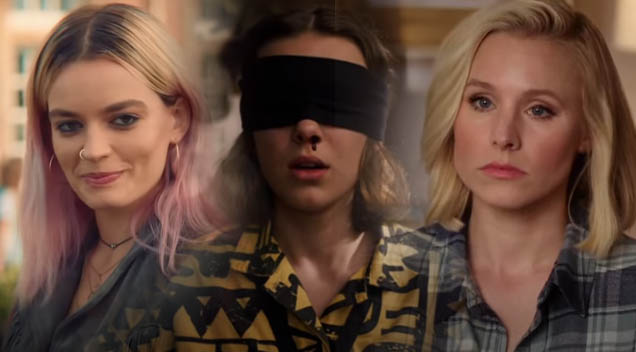 Movies are a great way to pass the time during the quarantine but sometimes, you need something that’s a bit more time consuming and a bit lengthier; that’s where TV shows come in. TV shows on streaming services allow people to binge-watch entire seasons in a day or so; catching up on the latest hit show everyone’s talking about or reliving a beloved favorite instantly with the click of a button. With nothing but time on our hands, there are lots of high quality shows on Netflix to soak up your time. These are my picks for the top 10 best TV shows available on Netflix right now.

The show that everyone goes to when they can’t find what they’re looking for, “The Office.” People have made memes about how common it’s become for people to just end up rewatching after scrolling through titles trying to find something new. “Office” is easy to sit down and enjoy a comedy ensemble piece that just works no matter which episode or season you find yourself landing on. It’s great as background noise or to fully absorb and focus, either way, nothing says “Best TV show” than the one you always find yourself going back to again and again.

Despite having ended just last year, “Good Place” has not only become one of my favorite shows ever but is, in my humble opinion, one of the greatest TV shows ever created. This show is exploding with creativity, brilliant humor, and an excellent core group of characters that features some exciting new talents and the ever-lovable Kristin Bell and Ted Danson. To speak too much of this show would spoil mountains worth of clever writing and plot twists that even the sharpest viewer can’t see coming. It’s about a girl who dies and goes to Heaven (referred to as ‘The Good Place’) only she’s not supposed to be there and belongs in “The Bad Place” and tries to become better so she can stay and that’s all I’ll say. Highly, HIGHLY recommended, a must-watch.

This was the Netflix flag show that put them on the map and remains easily their most creative and impressive, high-quality original programming to date. With 3 seasons under their belt and a 4th one on the way, “Stranger Things” nostalgic 80’s sci-fi story about a psychic girl opening up dimensions that leak monsters in a sleepy little town continues to grab people’s attention and wow them with their incredible cast and original writing and unique storytelling. Even after countless new shows have come out of Netflix’s original TV slate, “Stranger Things” is a landmark accomplishment that brings viewers everything they never knew they wanted and more.

Another “big first” for Netflix, this was Marvel’s first streaming service only TV series made exclusively for Netflix and man; what a way to start. “Daredevil” was a dark, violent, gritty and brutally intense take on the superhero character Ben Affleck famously butchered in film form. This show allowed Marvel to explore darker, mature levels that none of its films could attempt, and not only that, but they did it smashingly well. Charlie Cox, Deborah Anne Woll and Vincent Dinofiro lead a stellar cast of compelling characters and continue to push the boundaries of a more grounded superhero approach. Of all the Netflix spawned Marvel shows, “Daredevil” remains the cream of the crop and with 3 full seasons, it’s a fantastic show to get sucked into.

Netflix not only excels with live-action programming, but it also has a few home runs in the animation ballpark as well. From the creators behind “Avatar: the last air bender,” “Dragon Prince” follows two young human princes and a female elf assassin as they try to prevent a war between the mystical world and the human world by returning a dragon egg back to its royal mother. What the show lacks in animation polish it makes up for with elaborate world-building and likable characters. It’s a show that has a little bit of something for everyone and continues to grow in maturity, raising the stakes, expanding relationships, and becoming a deeper and more emotionally powerful show with each season. It’s great for adults, young adults and teens alike.

6. The Haunting of Hill House

Horror TV series is a relatively new trend that has grown thanks to such shows as “The Walking Dead” (another great series to see on Netflix) and “Scream: The Series.” Netflix’s TV adaptation over the book is genuinely terrifying and macabre and also very human and real with well-developed fleshed out characters and family drama story explored over a unique narrative approach. The great thing about this show is its replay value. You can watch this show multiple times, still, be scared witless and discover new story elements, new hints, and new ghosts with each viewing. It’s fright fest for sure but so well made and written, it’s worth the nightmares.

Looking for something a bit different? “Sex Education” is a comedy teen series with a very mature flavor that continues to explore all kinds of wild sides for your viewing pleasure. Asa Butterfield is an awkward teen whose mother (Gillian Anderson) is a sex therapist and her profession has given him some unique insight into the student body at his high school. The show digs deep into every kind of sexual/mature subject matter, from masturbation, LGBT relationships to defining family labels in a weird world of sex and it’s highly amusing and fascinating. Season 3 got delayed from the pandemic but you got 2 full seasons to enjoy.

Those seeking female empowerment can’t get much more literal than Marvel’s booze binging, female PI; Jessica Jones played to perfection by Kristen Ritter. “Jones” is another fine example of Marvel branching out and exploring different genres, this one is mystery mixed with superhero drama and it works surprisingly well. It’s a shadowy story that showcases the worst of humanity’s underbelly and holds nothing back. Little by little, new pieces to the expanding story is discovered and it easily sucks you in with its cryptic clues. On top of that, “Doctor Who” himself, David Tennant plays one of the best TV villains ever put to film; he is reason alone to binge this show.

Another different approach to superhero television, “Luke Cage” brings a cultural aspect to Marvel’s universe with a simple concept that excels and works on so many levels: a bulletproof African American man in the rough streets of Harlem. Featuring a predominantly African American cast, “Cage” puts a camera on life on the streets and displays gang/gun violence with a superhero lens; bringing quality tension and drama in a world of people with powers and science experiments. The cast is the real powerhouse of the show and becomes even more phenomenal in the second season. With the likes of Mike Colter, Alfre Woodard, and Mahershala Ali, this show is a different taste of edge you won’t be disappointed in.

10. A Series of Unfortunate Events

One of the first series I saw when I got Netflix, “Unfortunate events” is truly a unique show in every sense of the word. It’s a fractured fairy tale about 3 orphans who embark on a weird and wild adventure to escape the clutches of their villainous guardian; Count Olaf (Neil Patrick Harris). The show is a mixed bag of genre combinations: humor, drama, tragedy, family-friendly, musicals and so many more. The show plays like its children aimed but its humor and unique narrative structure can easily capture anyone’s attention. And with numerous cameos from multiple stars such as Peter MacNicol, Tony Hale, Joan Cusack, Patrick Warburton, Nathan Fillion, and many more, this show will continue to surprise you episode after episode.