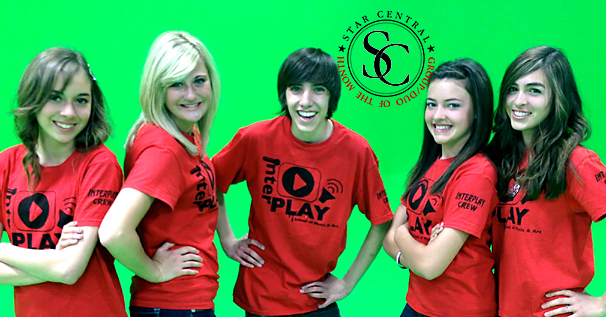 The Interplay Crew is a shining example that ‘age’ is no barrier when one has the talent, drive and ambition to go for their dreams. Originally formed out of Interplay School of Music and Art in Rio Rancho, New Mexico, USA, this teen pop singing group sensation has achieved the unprecedented feat of coming in tied for first place as StarCentral Magazine’s Best Duo/Group for June 2012! Comprised of five (Bailie, Lauren, Nick, Sasha, and Teagan) incredibly talented vocalists who “…utilize advanced harmonies along with a high-energy, hip hop style of dance,” Interplay Crew first performed together in October 2009 at the Albuquerque International Balloon Fiesta. All five teenagers share a deep love for music as well as “…the drive to have a successful career as a musician.” When they perform, they all enjoy the “…feeling we get seeing the audience respond to our performance, and knowing that we are getting to do something few people are able to do.”

As a group made up of five individuals, it is easy to imagine that melding all their different personalities would be a challenge but “…we had to learn to put aside our differences and work together as a team…” This they have done so successfully that Interplay Crew can be found performing at almost every major event in New Mexico including “…the Albuquerque International Balloon Fiesta, New Mexico State Fair, Freedom Fourth, Summerfest, Pork & Brew, Taste of New Mexico, Arts in the Park, Corrales Harvest Festival, Rio Rancho’s Winterfest…”, the list is endless! They have also performed as the opening act for jazz artist, Sonia Kitchell as well as for Ryan Star, winner of CBS’s Rock Star Supernova, as the Albuquerque Summerfest.

For the moment, Interplay Crew is busy at the annual Vocalize U 2012 Artist Intensive Summer Event in Los Angeles which is another “…step closer to our dream of making it big!” But while fame and fortune beckon, Interplay Crew will always “…strive to be positive role models have committed to use their talent to support their schools and community…”