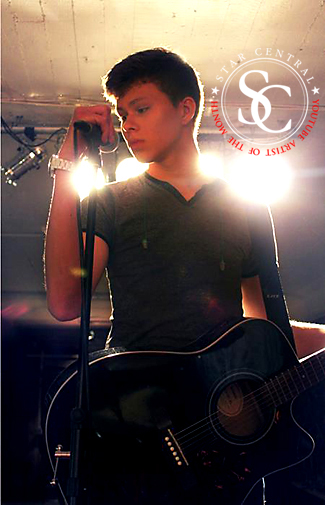 Living in rock-loving Finland, Tomi Tamminen, aka Tommy T, found himself in the unusual position of being a pop music artist, performing covers from artists such as Justin Bieber, Carly Rae Jepsen and One Direction. But still staying true to his country’s musical preference, it was Metallica that first inspired a younger Tommy T. He “…got inspired from their music and powerful stage charisma…” and started him on a musical journey to become StarCentral Magazine’s YouTube Artist of the Month for August 2012.

The 17-year old singer/songwriter’s career started almost as soon as he was big enough to be able to hold a guitar in kindergarten! Growing up in a family immersed in the performing arts – both Dad and older brother, Tino are musicians, and Mum is a dancer – Tomi’s first official performance “…was with my big brother’s school band when I was about 9-10 years old. I played guitar and my big brother was a drummer in that band…” After that, he began studying in a music academy.

While the music itself is an inspiration (“I get inspired from any kind of music if it sounds good.”), it is performing that Tommy T loves the most. “I always get a great vibe when I’m performing In front of live audience… every performance where people dance and have fun are the best…” He also enjoys creating his YouTube videos (which he works on with his brother) “because I get feedback from all around the world.” He recognizes that through YouTube and social media his music can reach a much wider audience that he could imagine – the “…internet and social media are very important for all musicians…” Not much more evidence is needed to prove this fact than the over 300,000 views that Tomi’s official YouTube channel, “Tommy’s Official Musicpage” has garnered in just over one year! He recognizes their efforts, and thanks, his supporters that have helped him win StarCentral’s competition.

This multi-talented young man has indeed all the potential of a long career ahead of him. His covers and original music have won him a legion of fans and he hopes that one day, he will be able to form his own band as well as write, produce and record his music. The world will be waiting…