When we visited Manila recently we caught up with one of the most recognisable faces in Philippine showbiz at the moment – it was none other than ABS CBN’s latest talent, Miss Ellen Adarna. For those who aren’t familiar with Ellen Adarna, she’s an internet sensation and glamour model and she used to be one of the main casts of GMA Network’s mega successful gag show “BubbleGang.” She has just recently appeared as a Guest Hurado in ABS CBN’s “It’s Showtime” and she has also appeared in a number of movies such as ” Si Agimat at Si Enteng Kabisot” and “Boy Pick-up”. Now that’s enough introductions, let’s get to know this beautiful actress a little better. Presenting Miss Maria Ellen Meriam Go Adarna in the InLife Magazine hot seat.

1. Ellen how did you get started in showbiz?

Well we have a family business in construction, hotels and condominiums and I used to actually work for my dad. Unfortunately we had a falling out so I ended up resigning from the job. Three days later I received a phone call from GMA and they were wondering if I wanted to be an actress. Of course, I initially thought it was just a joke because why would GMA call me out of the blue right? I wasn’t sure if the call was real, but then they kept insisting for a few weeks so eventually I gave in. I asked my mom if I can pursue a career in acting and she also agreed – before you know it I was a mainstay in Bubble Gang. It has been a fun and exciting journey so far and I never thought I’d ever be where I am now.

2. In all your years in showbiz name one person who has mentored you and what’s the biggest lesson you learned from that person?

It would have to be my dad, he has always taught me that nothing comes easy in life.

3. If there were no rules for just the one day and you could do anything outrageous what would you do?

I don’t live by the rules! I’ve been to jail before because I got drunk and got into a fight – I don’t think it can get any more outrageous than that! lol

4. Name three things about yourself but it can’t be about your looks or what you do for a living? 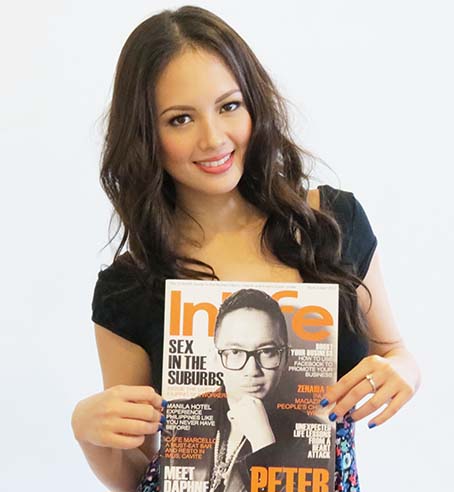 5. What would you say is your personal mission in life?

To be successful in my chosen craft and to be a good example to my siblings.

6. Name two of your dreams – one tangible and one intangible?

For the tangible one, I want to graduate college with flying colours – I want to be number one in every single subject! For the intangible one, I’ve always wanted to be an astronaut so I choose that.

7. What would you say is the sexiest part of your body?

My skin. I’ve gotten a lot of compliments from various people about my skin.

8. If you were going to compare your love life to a sport then what sport is it and why?

I choose boxing – so that I can punch my boyfriend whenever he makes a mistake! lol

9. What is the craziest thing you would do for love or money?

Well for money – Nothing! I’m not really materialistic. For love – I would probably do absolutely anything because I’m a die-hard romantic.

10. Choose a movie title for the story of your life.

That’s a really tough one! It would have to be “a beautiful disaster.” These words are actually tattoed on my back because this is what my dad always calls me for some reason. Life is a beautiful mess and I love it!

Read More
Screenshot from Watch Mojo’s YouTube video Who knew female villains can be so damn sexy?? Welcome to WatchMojo.com’s…
Read More
0
0
1
We all know that the chemistry between the two stars of hit TV show ” Be Careful…
Read More
0
0
0
With summer just around the corner there’s no better time than now to look at some of the…
Read More
0
0
0
Screen Rant just posted a video showing some movie scenes that weren’t originally part of the script and…
Read More
0
0
0