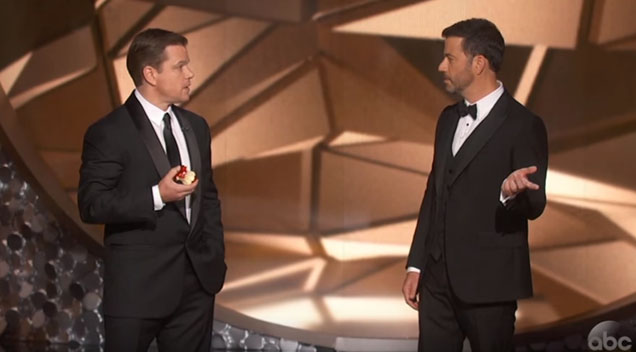 Jimmy Kimmel was not happy that he lost the Emmy for Outstanding Variety Talk Series to John Oliver and Matt Damon was able to rub it in his face by crashing his Emmys gig.

There’s been a long-standing feud between Damon and talk show host Jimmy Kimmel. If you’ve never seen a single episode of Jimmy Kimmel Live!, Jimmy usually ends every episode with the same joke: “Our apologies to Matt Damon, we ran out of time”.

According to ET Online, the big reason why Jimmy chose to make fun of Matt Damon back then was because “Matt Damon was just the first name that popped into my head. I was trying to think of an A-list star, and somebody we absolutely would not bump if he was on the show.” He further said “people laugh every time I say it. … Repeating the same joke every single night, you’d think eventually people would get tired of it, but they don’t.”

Damon has always been a fan of the joke and he even got his publicist to call Kimmel to say, “Hey, that’s funny. Don’t stop doing that”.

Well Damon was able to keep the feud alive by crashing the Emmy stage just recently and pretty much roasting Kimmel and humiliating him in front of other A-List stars – all in good fun of course.

Check out the hilarious video below (source: Jimmy Kimmel):