The Verdict On Now You See Me 2 DVD: Is It Worth Your Money?? 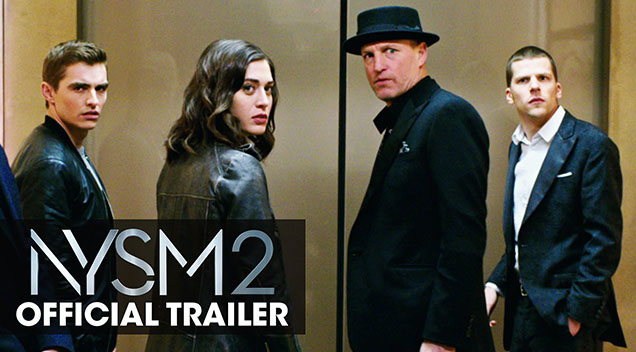 Synopsis: A full year has passed since the four horsemen outwitted the FBI in what had to be their greatest heist yet. They resurface for another mind-boggling trick that could surpass their first big act. The question now is, can they pull it off before the cops catch them?

Even before the release of this film, there have been rumours circulating about another sequel. However, with the ratings NYSM2: The Second Act has been getting, one has to wonder whether they’ll take another risk for a part 3. Although the film is a combination of humorous and convoluted, it is still totally fun, just like its predecessor.

A year after the events of the first movie, the remaining members of the Four Horsemen are in hiding and awaiting further instructions from the Eye, the centuries-old secret society that they’ve been recruited into. Their handler, and FBI mole, Dylan Rhodes, finally gathers them for a new mission. A new teammate, Lula, is added to replace Henley; and bring a feminine aura to the group, and ultimately, the movie.

Everything was going as planned in their comeback performance until a mysterious individual interrupts and reveals the group’s two biggest secrets: Jack Wilder is alive; and FBI Agent Dylan Rhodes is the fifth Horseman. They manage to escape together, with the exception of Rhodes who flees on his own. After the quartet escapes through a pipe in New York City–and this is where the far-fetched parts begin–they fall down and wake up in a restaurant kitchen… in Macau.

They are welcomed by Woody’s twin brother, Chase, who then brings the 4 to his boss: Presumed-dead tech magnate Walter Mabry, who recruits them to retrieve a device from a top-secret facility, which opens up the film for a plot twist, followed by a plot twist, that opens up to another plot twist, and another.

A lot went down in this sequel that was so different from the first movie. We learn more about Rhodes and his motivations. We learn his secrets and his story, and that bridges the first movie to this sequel, answering some of the questions that we had. However, The Second Act did open up more questions but I guess they’ll be pushing a third film that will focus on The Eye and how the Four Horseman will fit in.

The marriage of CGI effects and cameraworks were perfect, and one element balanced the other. Some action scenes were executed nicely and somehow believable. The cast’s chemistry was still there, fortunately, acting as a glue that holds all the unnecessary scenes. I did miss Henley, but Lula was a welcome addition. Hopefully, both ladies will be present if the next movie will happen.

Above all, the central focus is not reality, not logic, but magic. Honestly, the whole movie is very absurd. The plots and scenes are vague or doesn’t make sense, but, it was very entertaining, relying on style and humour rather than a plot. More than a sequel, NYSM2 is a popcorn film meant to entertain. And among the sea of remakes and superhero franchises, it’s in fact a breather.

I can recommend Now You See Me 2: The Second Act to people who enjoyed the first movie, those who doesn’t feel the need to dissect each scene, or those who may not find some parts believable, but do not dwell on it.