The Verdict On Unbroken: Is It Worth Your Money?? 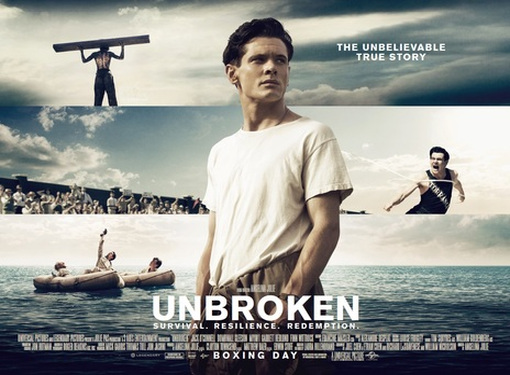 Synopsis: Louie is a USA athlete and sprinting champion who is positioned as a bomb aimer during World War II. While on a bombing mission against the Japanese, their war plane suffered a fatal crash that left him, Phil and Mac as survivors holding on to their lives on a water raft for 47 days. Mac didn’t survive. Phil and Louie were caught by the Japanese Navy and were held as prisoners of war, where they bear the cruelty of Japanese forces.

Unbroken is another literary adaptation derived from the work of Author Laura Hillenbrand. The non-fiction book is titled Unbroken: A World War II Story of Survival, Resilience and Redemption. The film’s genre touches a war drama story about a successful athlete and Olympian named Louie and his journey that depicts faces of survival and forgiveness.

The story unfolds by showing Louie aboard a war plane that barely survives from engine failure. As the film rolls, it brings flashbacks of his past when his brother Pete discovered his ability to become a future Olympian and athlete. Louie did not fail. Jack did. He struggles to pull out magical artistry to portray his role in a more compelling way. He screams and acts out emotions through his facial expressions as directed by Jolie but even with this, most are not happy and convinced of his lifeless and bland releases of anguish.

Perhaps, it’s not all about Jack’s raw performance. Let’s not forget that award-winning actress Angelina Jolie is also behind the camera as she brings her second directorial stint. But unlike the glittering genius behind the film “In the Land of Blood and Honey”, which was her first directorial endeavour, Jolie seems to lose the glitter on this one. The genius fades just like that. In fact, it’s a hit-and-miss because this time around, her directing prowess is nowhere to be found, but thank God for Miyavi who shed some bright lights through his impressive performance.

The trouble with picking an inspiring real-life story often poses major challenges to the director and the actors. Louie Zamperini is an extraordinary person who lived during the war era and when the film fails to hit a single scene, everything spirals down the abyss of failures. Just like what happens in Jolie’s Unbroken. There are so many important and historical details omitted probably due to the desire to focus more on Louie’s consoling life, but it dulls the beauty of the entire story.

Unbroken is an average film, a typical case of overpromised and under-delivered. The story itself is inspiring and the main character is admirable, but the end product clearly lacks inspiration. Is it worth seeing? How about this, if you are a true blue war film fanatic, Unbroken might just break your expecting heart.