The Verdict On Get Hard: Is It Worth Your Money?? 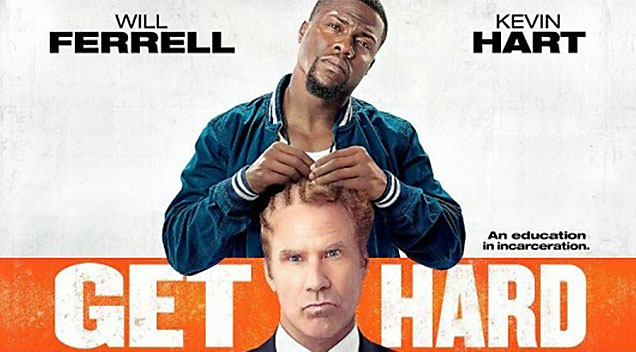 Synopsis: James King is a wealthy hedge-fund manager who is on the verge of being imprisoned as he was caught for cases of theft and fraud. With all his collected and horribly negative impression about prison, James hired a prison trainer in the character of Darnell. The latter will soon earn big pay cheques as he teaches James to toughen up in preparation for his pending imprisonment.

Etan Cohen has put his directing skills to test as he brings you an American comedy cinema titled, Get Hard. Known as his directorial debut, Cohen has not only led the crew but also helped in the screenplay along with Ian Roberts and Jay Martel. The question is, how well did he do?

Get Hard follows the story of the two unlikely tandem, Hart and Ferrell as they play the characters of Darnell and James. As a wealthy hedge-fund manager facing adversary, James finds himself in trouble with the law for alleged cases of theft and fraud. With the future turning unfavourable to him and with his collected and horribly negative impression about prison, James should get hard to survive his impending terrible days inside the prison bars. To do this, he has to hire a prisoner trainer who will teach him to toughen up and this is where issues in this film begin to arise. As James eyes Darnell as his ‘tutor’, thinking he was an ex-con because of his skin colour, the film has deliberately touched a sensitive and timely issue on racism.

Obviously, many critics turned sour as Cohen and his team of screenwriters have found a delicate way to elicit laughter from the audience. Not only does this issue flip believers, discussions on homophobia has also taken the spotlight as this double-trouble begins their prison training that addresses James’ impression about prison rape. This goes to say that this film has not earned Rated-R for nothing. If raunchy comedy does not fit your taste, you better turn the other way or disappointment will eat you up from your seat.

The film is not without its strengths, though. Ferrell and Hart may be an unlikely team-up but this film has certainly proven that their tandem is a comedic partnership that should be explored more in the future. Get Hard is also not void of laughter, which in this case is derived from James who has mistaken Darnell as an ex-convict when he is, in fact, a responsible family man trying to earn a living, with no record of any misconduct.

Overall, Get Hard does the job for staying faithful to its genre. The screenplay might be a bit inconsistent but for an audience who seek laughter and entertainment, then this one might just suit your taste.