The Verdict On The Second Best Exotic Marigold Hotel: Is It Worth Your Money?? 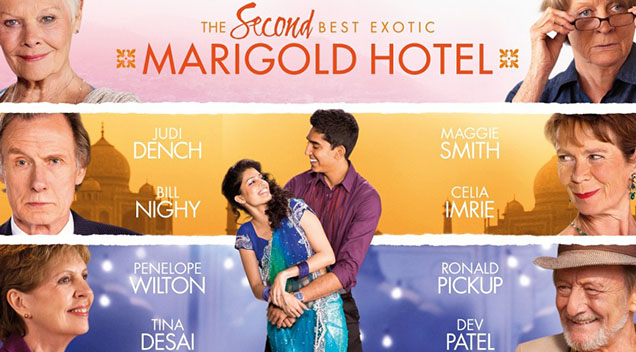 Synopsis: Hotelier Sonny and business partner, Muriel are planning to expand the Best Exotic Marigold Hotel and they both see a potential in the growing market of Jaipur. The two travels to California in the hopes that Ty Burley, a hotel magnet, will support their proposal but only after a mysterious hotel inspector conducts an evaluation of the business in India. Meanwhile other hotel residents Evelyn, Douglas, Madge, and Carol face their complicated relationships. On the other hand, Sonny, determined to pursue their business plan, works his way to impress Guy Chambers whom he suspects as the anonymous inspector.  As the story unfolds, they all find themselves charmed in a vibrant Indian wedding.

After the surprise box office hit of The Best Exotic Marigold Hotel, which was based on Deborah Moggach’s 2004 novel called ‘These Foolish Things’, another offering comes in under the same director and screenwriter, John Madden and Ol Parker respectively.

The Second Best Exotic Marigold Hotel is a comedy-drama film that extensively features the stories of an ensemble cast, which is pretty much the reason why this movie is still worth your time and money. As to whether the overall quality lives up to the expectation formed by the success of its initial partner, the answer appears to be somewhat unfavourable.

Is a sequel really necessary?

The film follows the story of hotelier Sonny Kapoor, his business partner Muriel, and the complicated romantic set-ups of the hotel’s elderly residents. As Sonny and Muriel travel to California to propose the hotel expansion plan, the other characters back in India seem to be embroiled in complicated love affairs and romances. As if these subplots are not enough, the creative team spices it up with the appearance of novelist Guy Chambers played by Richard Gere, who will find an inspiration in the character of Mrs. Kapoor. The dragging complexity is never-ending as Sonny suspects him to be the anonymous hotel inspector and desperately impresses him to the point of encouraging romance between his mother and Chambers.

If this sounds like a promising storyline that mirrors the power in the initial film, then a big disappointment awaits you. Marred by lifeless screenplay and uninspired actions, The Second Best Exotic Marigold Hotel truly lives up to its name as an inferior sequel that should have not been brought out to the audience. Loyal followers of the initial ensemble cast can still delight in this film though as it means an extended amount of time to know more about their acting skills, only that these are trapped within the absence of variations from its original film.

Second best, indeed! Audience can still overlook the lack of creativity in this film by focusing on what it tries to portray. You can contemplate about growing older and retirement, which can be easy if you will lock your thoughts on Smithard’s seamless cinematography and Child’s impressive production design.