The Verdict On Boychoir: Is It Worth Your Money?? 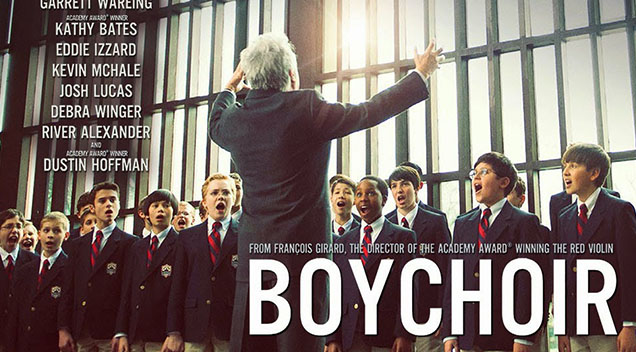 Synopsis: Stet is an 11-year old boy with a remarkable gift for singing. Shortly after his alcoholic mom died from a car accident, he finds out that he has a rich dad who supports him financially but is never interested in him. With the intention to keep his existence as a secret to his family, Stet’s dad sends a pay check to the headmistress of the National Boychoir Academy where the boy meets Carvelle, a brusque, tough-loving choirmaster who will play a great role in his life.

Can an ensemble cast boost up a very predictable, lacklustre narrative?

This may be the case for this year’s American drama film, Boychoir in which the film banks on Hoffman, Bates, Winger, and Izzard among others. The film follows the story of a young boy named Stet and his amazing gift for singing while attending the National Boychoir Academy.

Motion picture materials that feature boyhood and all the familial melodrama that revolves around it are definitely one of the most tackled these days. Filmmakers and the entire creative team are enamoured to bring the raw talent into the spotlight as they push out all compelling emotions into the scenes. This remains true for Boychoir. Stet is an 11-year old boy who didn’t know he has a well-off father until his alcoholic mother died from a car accident. The way Stet was treated by his mother has made him rebellious and often times, unable to fit in, especially around his wealthy schoolmates. Wareing who played Stet is a newcomer young actor who displays photogenic qualities in front of the camera. He is clearly a joy to watch despite his underdeveloped character. Fortunately, the film is far from plummeting to nowhere as it centres on Hoffman whose calibre hopes to uplift the film’s uninspiring material.

Boychoir has Hoffman to thank for. He played as a no-nonsense musical conductor who took little Stet under his wings. His seamlessly played tough-loving persona was too hard to ignore, while Bates and Winger impressively matches his brilliant portrayal. What could go wrong with a stellar cast like this? In fact, it is admirable how genius actors like them can deliver an interesting performance despite the almost disastrous quality of storytelling.

Is Stet’s musical ability worthy of your time and money? While director Girard also struggled to put drama where the scene calls for it, Ben Ripley’s screenplay has luckily managed to save the narrative from incredible dullness. The feel-good vibe can be very much attributed to his work. His artistic gift of words has drawn touching emotions where it should be laid out. Although Boychoir is a bit formulaic, consider it as a musical treat and you will never be disappointed.