The Verdict On Tomorrowland: Is It Worth Your Money?? 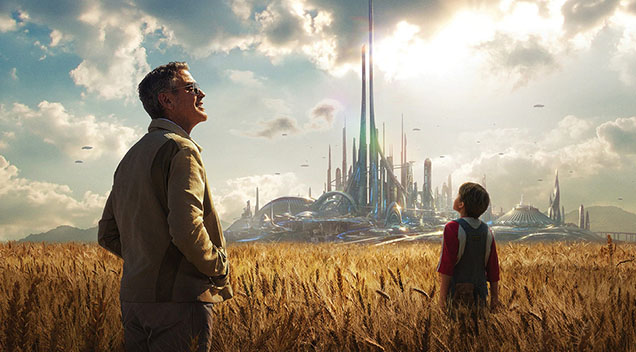 Synopsis: Genius guy Frank travels to a futuristic Tomorrowland with scientifically curious Casey and Athena through a magical pin, which when touched brings them into a mysterious world where they can see what could happen in the future. Apparently, their actions while there will have a forever effect not only in them, but to the real world, as well.

Here is a film that geeks would love to relish just by the sound of its title, but can the whole Tomorrowland manage to keep its audience up until the 130th minute?

Tomorrowland is a science-fiction adventure film inspired by one of the attractions in Disneyland. It is a product of crafty, ambitious dreamers who believe in a better tomorrow as reflected in the film. This part is not hard to miss as the creators have it spilled all over the scenes.

The story follows the adventure of Casey, a technology whiz whose heightened curiosity led her to an unexpected turn of mystery as she finds a magic pin which when touched transports her into an ultimately different world called Tomorrowland. In this place, she meets Athena and Frank; together they embark on a journey that allows them to see what could possibly happen in the future.

The film is an ambitious attempt that succeeds in terms of performances. Award-winning actor, Clooney and Laurie have both proven their calibre as far as acting is concerned. Same thing speaks for the other actors whose youthfulness becomes a vivid language of hope and positivity.

The nagging narrative rubs off the idea of climate change as the film starts to roll towards the preachy side of it whenever the team camps in Tomorrowland. You guess it; people who are in denial of climate change being a product of man-made destructions won’t be enjoying this film as much as the optimists would.

Tomorrowland is another glimpse into Bird’s aspirations. With so many experiences that impressed the young audiences such as in Ratatouille and The Incredibles, viewers can expect a magnificent edge in this film and Bird will not disappoint. The visual effects incorporated are superb that you might just ignore the predictability of its story, never mind the fact that Bird’s artistic skills played a great role in elevating the film’s quality a bit far from being garbage.

Is Tomorrowland worthy of your time and money? The film is not at all perfect, the bankable stars may have helped uplifting its story but the notion that everything is possible is played over the top. You might even find it hard to relate at all. If there is anything that you can build connection with, it’s the film’s ideals and beliefs that really speak volumes, fit in today’s age.