The Verdict On Aloha: Is It Worth Your Money?? 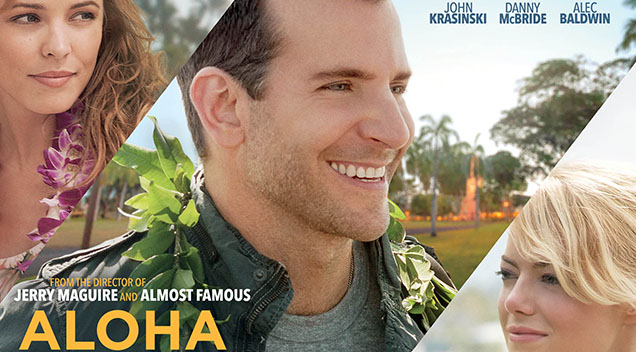 Synopsis: When Brian returns to oversee a satellite launch in Oahu, Hawaii, his journey begins to unravel more towards the personal side rather than the professional one. This is marked by Tracy, an old flame who ended their engagement years prior and Allison, an Air Force Pilot who becomes Brian’s shadow during his stay in Hawaii. Brian is trapped between his past and a developing feeling for Allison. Can he resolve his personal baggage in time for a new romance??

When it’s Crowe’s, it has to be good, right? After all, Crowe is popularly known for his deft and epigrammatic filmmaking style. His films bring an infectious feel to it that lingers on viewers even beyond the actual cinematic experience. Who would ever forget Singles or Jerry Maguire? These are the kind of love stories he tells, but unfortunately for Aloha, Crowe’s artistic genius appears to be missing in action.

Aloha is an American-comedy film that faces an impending title of becoming the worst rom-com hit this year as it stumbles on a $10.5 million earning since the day it was initially released. It turns out that some filmmakers are missing the point. Stellar cast is never enough to save a feeble storyline and this is the case with Crowe’s scattered production.

The film centres on Brian, a defence contractor who heads to Oahu to oversee a satellite launch. What seems to be a professional stance turns into a different take as Tracy greets him right out from the plane. This breathes life to all of his personal baggage knowing that his Hawaiian adventure will be confronted by an old flame responsible for their broken engagement. McAdams who plays Tracy is quick to develop a chemistry with Cooper which appears so displaced as it is supposed to be Stone who should be building that more than anyone else. Unfortunately, it never happened.

As you dig deeper into Allison’s quarter Chinese, quarter Hawaiian character, the more you will discover that it’s a half-baked and unconvincing role for Stone to play. While it is impressive to show diversity and range in acting, it would not hurt to present reality and logic as well. A mixed-race actress would have brought justice to her story. Contradictions also beset the film’s narrative. How could a fighter pilot such as Allison fear the environmental hazard of satellites??

Cooper remains charming as ever but this film is so mediocre that you could almost miss his talent. But it’s not all about low lights though, Baldwin, Murray, and Kasinski managed to show off their bankability through their decent performances while first-rate art direction and the production design should be enough to carry you throughout the end.

Is Aloha worth your time? It’s definitely the worst from Crowe with underdeveloped subplots screaming the moment the camera rolls. You can head out and watch it at you own risk – but don’t say we didn’t warn you!