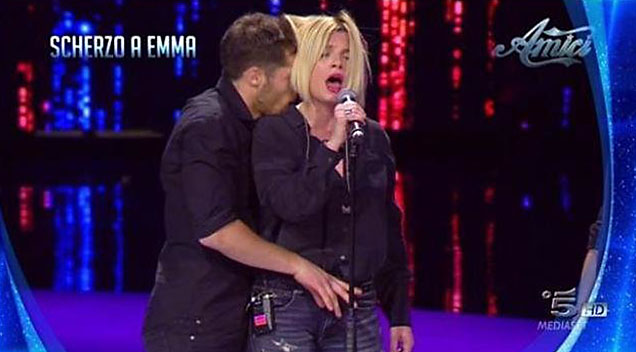 An Italian TV show has come under fire after a male dancer groped a female pop star as part of a stomach-churning sexual assault situation disguised as a ‘prank’.

In this sickening video footage, a male dancer was getting way too close to former Eurovision contestant Emma Marrone to the point that she has repeatedly told the dancer to stop what he was doing as he carried on kissing and touching her all over her body.

Even though the dancer was clearly sexually assaulting Marrone, the show went on and only after pushing and chasing the dancer way prompted the set producers to eventually reveal that this was just some sort of a sick prank. The “prank” was on the Amici di Maria De Filippi talent show and the cringeworthy practical joke was greeted with laughter and applause from the studio audience.

Scroll down to watch the video below courtesy of UNIVID: