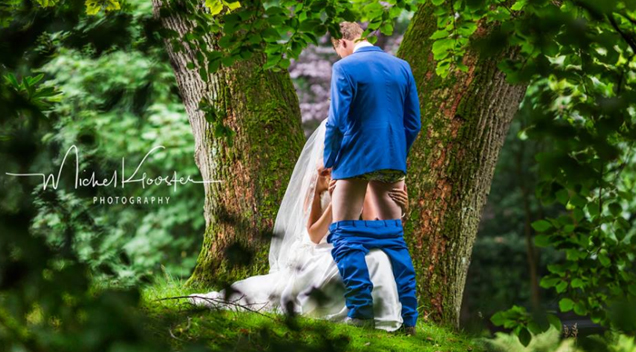 This wedding photo was captioned: ‘Some newlyweds cannot wait for the party to be over’ and though it may show a Dutch bride performing a sex act on the groom, it’s all just staged and completely innocent.

In this photo taken by photographer Michel Klooster, you can see the groom standing in his fancy blue suit; his trousers are around his ankles while his new bride is on her knees in front of him seemingly performing a sex act.

This photo of a Dutch couple was posted online by Klooster, and within seconds it was shared by thousands of people.

The photo had a caption that read: “Some newlyweds cannot wait for the party to be over so they can quietly retreat to their suite for a smashing wedding night… Luckily they already exchanged their wedding vows, and they were officially married.”

This photo might look X-rated to most people, but the newlyweds just posed in this position as a joke, and apparently, it was even suggested by one of the mothers of the couple.

Check out the photo below courtesy of Michel Klooster.