The Verdict On “A Wrinkle In Time” DVD: Is It Worth Your Time Or Money?? 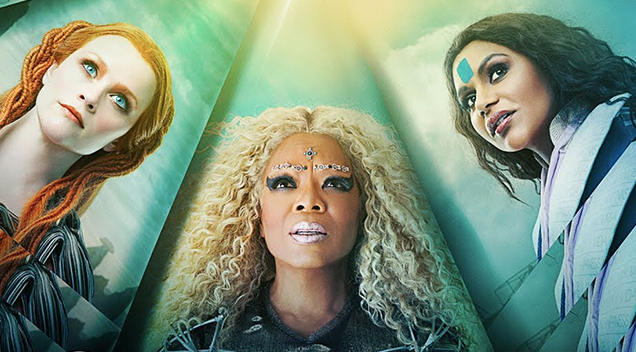 When the trailer for this flashy, epic fantasy adventure from Disney came out, I only knew of two things for sure: it was based on an ancient book, and the trailer looked REALLY trippy and off the walls crazy interesting. So much attention and applause were given to this film with the interracial family element and the fact it was the first big blockbuster directed by an African American director, celebrities and companies even took underprivileged kids to see the film in theaters; similar to with Marvel’s “Black Panther.” Needless to say, “Black Panther” is going to be remembered for years to come, whereas you’ll be lucky if anyone remembers “A wrinkle in time” an hour after seeing it. So what happened? How did such a classic science fiction story get turned into a forgettable mess of a misfire? Let’s backtrack.

Young Meg (Storm Reid) is a troubled girl; left bitter and angry at the world after her father (Chris Pine) mysteriously disappears for four years without a trace or any kind of answer. She eventually finds out the truth from her stepbrother Charles Wallace (Deric McCabe), who was communicated to by three celestial beings: Mrs. Which (Oprah Winfrey), Mrs. Whatsit (Reese Witherspoon), and Mrs. Who (Mindy Kaling). Their father discovered interdimensional travel and accidentally transported himself into a world where the universe’s greatest evil, the IT, exists and is now holding him prisoner. Meg, Charles and their new friend Calvin (Levi Miller) must travel across new worlds, face new challenges and discover their true potential as they venture to save Meg’s father.

One way you can always tell you’re watching a terribly made book-to-film adaptation is when you watch the movie, and you can clearly see how evident it is how much material is missing from the book, and this is WITHOUT having read the book myself. “A wrinkle in time” reads as if all the effort and intelligence was put into the space dimension jargon Pine spouts at the beginning of the film; leaving nothing behind but dialog so pathetically bland and lackluster; you’d swear the characters were putting themselves to sleep with their own banality. It’s hard to imagine so much cash was dropped on the special effects, and wondrous imagery and not a single dime was spent on the script. Everything from the cast to the dialog to the pacing is insufferably bad. It’s uninspiring in every possible way, and you can feel it’s dullness a mile away.

I know child actors are expected to be bad, but this is just plain awful. Storm Reid gets points for trying but when you’re left with terrible dialog such as “but she was being mean,” no one can escape failure. Levi Miller and Deric McCabe are beyond annoying. Miller has the personality and depth of Styrofoam and McCabe is more obnoxious than any CGI menace this story can cook up. It didn’t help his annoyance factor much by having everyone in the film constantly referring to the character by his full name. If I had to hear someone shout “Charles Wallace” one more time, I was going to burn the theater down with everyone in it.

The biggest and most consistent problem with “Wrinkle” is that it’s a glorified travel channel special. The characters go through CGI overloaded viewmaster journeys that accomplish absolutely nothing, and when they finally do get to the “big bad evil IT,” it was wasted and rushed off-screen; nullifying any build up or credibility the story built up for it. The only interesting characters who present some modicum of cleverness are the three celestial beings. Kaling and Witherspoon are clearly bringing their sweet selves to the roles, and it makes them all the more delightful to watch, Oprah, on the other hand, acts like she just woke up from bed and is still groggy. But they appear too little and offer too few of a meaningful impact to make a difference, especially when the rest of the cast and story suffocates you with its barely existent bare bones story that fails in every method and message.

Overall, “A Wrinkle in time” didn’t fail because it had an interracial family at the center point of the story, nor did it fail because the director was an African American woman; it failed because it’s a terribly written and awfully acted film that could’ve been something smart. Instead, it turned into something colossally boring and too simplistic to even be seen as something meaningful. This is glorified computer eye candy, nothing more and nothing less. It’s flat, dull, and dead on arrival; it’s too dumbed down ever to be anything more than the heaping slab of suckage that it unfortunately is.