OMG! Mayweather is Coming Out Of Retirement to Fight Manny Pacquiao A Second Time 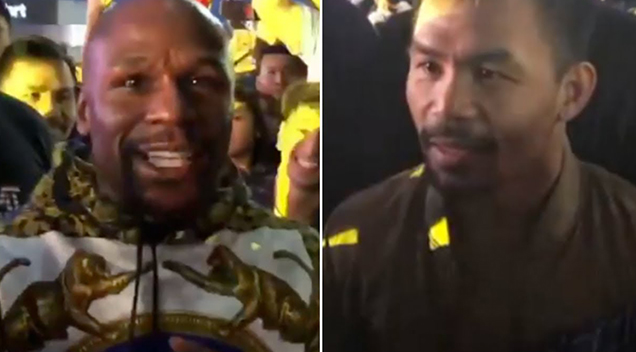 Screenshot from AUC – ALL URBAN CENTRAL

It looks like Boxing icons Floyd Mayweather (50-0) and Manny Pacquiao (60-7) are facing each other yet again in the boxing ring.

Mayweather announced on Saturday via Instagram that he will be coming out of retirement to fight Pacquiao. The big fight is reportedly set in December of this year, and it will be a rematch of their 2015 fight in Las Vegas, Nevada, which Mayweather won via a 12-round unanimous decision.

Mayweather wrote, “I’m coming back to fight Manny Pacquiao this year another 9 figure payday on the way.”

Mayweather also posted a video showing him exchanging words with Pacquiao at an event. Pacquiao can be heard teasing Mayweather because he now holds one of the belts they fought over three years ago and Mayweather replied by saying, “I will take them from you like I did last time.”

Check out the video below courtesy of AUC – ALL URBAN CENTRAL: