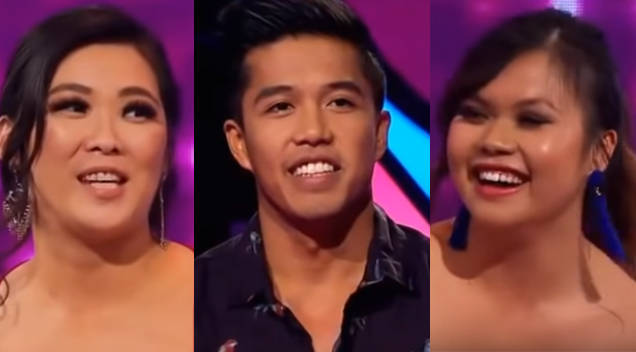 A recent episode of an Australian dating show “Take Me Out” featured a Filipino man and it caused quite a stir in the Asian community.

In this dating show, a bachelor must impress a panel of thirty women who can show they like him by keeping their lights on. Those who dislike the bachelor can just turn the light off.

Sydney bachelor and vlogger George was hoping to find someone he can take along on his trips around the world. After George briefly introduced himself in the first round, 24 out of 30 women kept their lights on. While the number is pretty good, unfortunately, many of those who did not want to date him were actually Asian women.

Gianna, one of the few women who turned their lights off, told host Joel Creasey that “I kinda have a ‘No Dating Asians’ sort of policy. You kinda look a bit like my brother.”

Creasey was visibly shocked, and he just joked “Racist! Gianna, I did not expect that from you. We have a diversity charter here.”

Sheree, another woman of Asian descent, copied Gianna’s answer and said “I’m sorry, I have a ‘No Dating Asians’ policy as well. I don’t wanna be mistaken as like, brother and sister. It could get awkward.”

Creasey was once again visibly shocked along with some of the women in the panel, and he just blurted out “Oh my gosh, what is that, is this a thing? Is this a regular occurrence?”

Thankfully, other women in the panel expressed a non-racist opinion on dating Asian men.

Check out the video below courtesy of Asian Ascension: