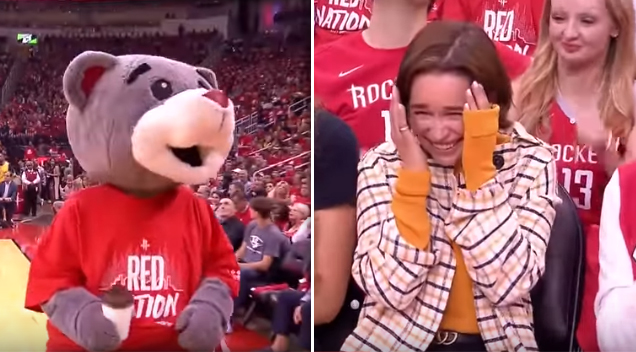 Screenshot from House of Highlights

It’s hard not to take notice of Emilia Clarke aka Daenerys Targaryen these days – with the end of Game of Thrones fast approaching, the whole planet just wants to see more and more of Emilia.

Well, it looks like the queen of dragons decided to take some much needed time off from conquering the world and instead, she decided to let loose by watching an NBA game. The thing is, it’s hard not to notice her so she ended up getting the royal treatment at the Western Conference Semifinals held at Houston’s Toyota Center.

Emilia was watching a game was between the Golden State Warriors and the Houston Rockets, when a mascot noticed her royal highness so he ended up dropping his coffee cup in surprise at the sight of her – Emilia’s reaction was absolutely adorable!

Check out the video below courtesy of House of Highlights: