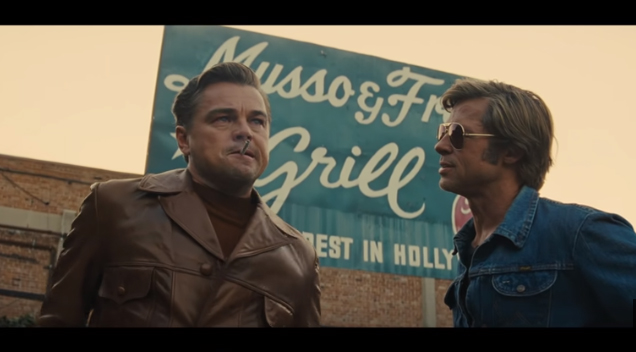 When everyone found out that Tarantino was making a movie that starred Leonardo DiCaprio, Brad Pitt, and Al Pacino – the whole world got extremely excited and couldn’t wait for the movie to come out. Well now it’s finally out and it’s shaping up to be a masterpiece.

From someone who directed Pulp Fiction, Reservoir Dogs, and Kill Bill – you’d expect great things. And in this movie, he definitely did not disappoint. Once Upon A Time In Hollywood has already been critically acclaimed at the Cannes film festival. In fact, it was so good that it received an amazing seven-minute-long standing ovation from viewers!

Here’s the synopsis of the movie according to Sony Pictures Entertainment: “Quentin Tarantino’s ONCE UPON A TIME IN HOLLYWOOD visits 1969 Los Angeles, where everything is changing, as TV star Rick Dalton (Leonardo DiCaprio) and his longtime stunt double Cliff Booth (Brad Pitt) make their way around an industry they hardly recognize anymore. The ninth film from the writer-director features a large ensemble cast and multiple storylines in a tribute to the final moments of Hollywood’s golden age.”

Check out the video below courtesy of Sony Pictures Entertainment: