“We are disappointed by the recent comments about trans and plus-size models made by Ed Razek, CMO of L Brands, Victoria’s Secret’s parent company. Such comments create a hostile work environment for people who do not conform to Victoria’s Secret’s mold – one that enforces an idea of female beauty that is predominantly white, cisgender, young and thin.

“In addition to the brand’s issues with lack of diversity and inclusion, Victoria’s Secret photographers have faced allegations of sexual misconduct by models, which have yet to be adequately addressed.

“If Victoria’s Secret is truly a leader, it will join the RESPECT Program so that models and their colleagues can work in a respectful, accountable and inclusive environment. The RESPECT Code requires that all be treated with dignity and respect on the job, regardless of race, size, or gender identity. This is not the “PC” thing to do – this is the best business practice.

“When any part of our industry is excluded or oppressed, abuse is able to flourish and hurts us all. We can and need to do better.”

After seeing all the backlash, Victoria’s Secret decided to repair their image by hiring a stunning transgender model. Valentina Sampaio took to Instagram to reveal the exciting news, by tagging Victoria’s Secret with the caption: “Backstage click.”

It’s good to see that Victoria’s Secret is actually taking a step in the right direction. Below is Valentina’s Instagram post. 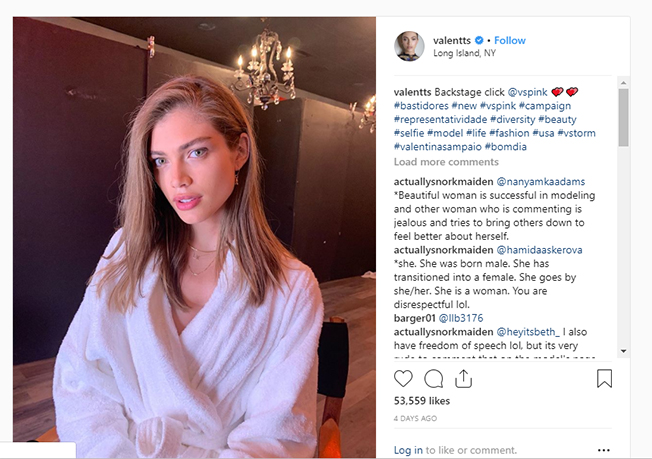