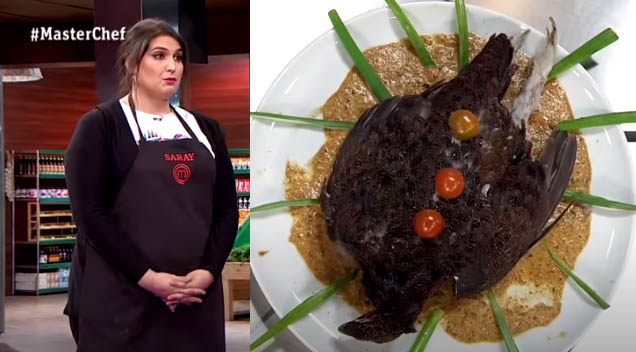 While MasterChef contestants have been known to make mistakes during their time in the show, one contestant on the Spanish edition of MasterChef committed a shocking act that made all the judges squirm.

When Spanish MasterChef contestant Saray Carrillo was asked to prepare and cook a partridge, she felt that the producers of the show were having a go at her after she previously confessed that she had a fear of handling birds.

So what did she do?

She went all Katniss Everdeen from The Hunger Games and served the whole bird with a slight smirk, even sarcastically garnishing it with a couple of cherry tomatoes on a bed of spring onions. One of the judges looked at the fully feathered bird and said (translated into English): “This has never been seen on MasterChef.”

Check out the episode below courtesy of Spain MasterChef: