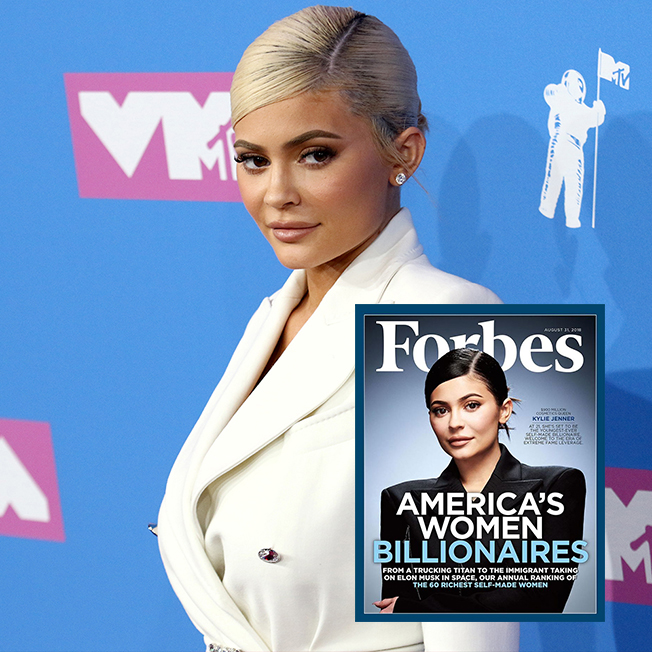 After appearing on the cover of Forbes magazine in July 2018, ranking No. 27 on their listing of the richest self-made women and then being declared as the youngest billionaire in March 2019, Forbes just recently stripped Kylie Jenner away of her title claiming that she has been inflating the size and success of her business for years.

Forbes reporters, Chase Peterson-Withorn and Madeline Berg, revealed in their detailed article how Kylie Jenner sold half of her cosmetics company in what they confirmed was “one of the greatest celebrity cash outs of all time.”

According to the article: “in the deal’s fine print, a less flattering truth emerged. Filings released by publicly traded Coty over the past six months lay bare one of the family’s best-kept secrets: Kylie’s business is significantly smaller and less profitable than the family has spent years leading the cosmetics industry and media outlets, including Forbes, to believe.”

In a detailed report, Forbes claimed that the family has spent years fighting them for higher spots on its annual wealth and celebrity earnings lists. They stated: “of course, white lies, omissions and outright fabrications are to be expected from the family that perfected—then monetized—the concept of “famous for being famous.” But, similar to Donald Trump’s decades-long obsession with his net worth, the unusual lengths to which the Jenners have been willing to go—including inviting Forbes into their mansions and CPA’s offices, and even creating tax returns that were likely forged—reveals just how desperate some of the ultra-rich are to look even richer.”

Forbes then explained that “based on this new information—plus the impact of Covid-19 on beauty stocks and consumer spending—Forbes now thinks that Kylie Jenner, even after pocketing an estimated $340 million after taxes from the sale, is not a billionaire.”

The Forbes reporters described that they actually had doubts about Jenner’s billionaire status but then it was “seemingly erased in November 2019” when “$8.6 billion (revenues) Coty announced it was snapping up 51% of Kylie Cosmetics for $600 million, effectively valuing the business at about $1.2 billion.”

This announcement gave Kylie “a major chance at expansion, plus a boatload of cash and apparently clear proof of her billionaire status.” However, Forbes has just recalculated Jenner’s net worth, and they eventually came to the conclusion that she is “not a billionaire.”

Forbes further claimed that “more likely: The business was never that big to begin with, and the Jenners have lied about it every year since 2016—including having their accountant draft tax returns with false numbers—to help juice Forbes’ estimates of Kylie’s earnings and net worth. While we can’t prove that those documents were fake (though it’s likely), it’s clear that Kylie’s camp has been lying.”

In a nutshell, Forbes came to the conclusion that Jenner’s fortune sits just under $900 million. They explained, “a more realistic accounting of her personal fortune puts it at just under $900 million, despite the headlines surrounding the Coty deal that seemed to confirm her billionaire status. More than a third of that is the estimated $340 million in post-tax cash she would have pocketed from selling a majority of her company. The rest is made up of revised earnings based on her business’ smaller size and a more conservative estimate of its profitability, plus the value of her remaining share of Kylie Cosmetics—which is not only smaller than the Jenners led us to believe but is also worth less now than it was when the deal was announced in November, given the economic effects of the coronavirus.”

Forbes apparently reached out to the Kardashian-Jenner to provide a comment on their exact numbers, but they “stopped answering” their’ questions.

You can read the entire article about Kylie Jenner by clicking this link.