Vote now for who you think should be the Sexiest Man Of The Month for May 2014! If you feel that you or someone you know deserves to be a featured as one of the Sexiest Men Of The Month then let our talent coordinator know by emailing eileen@starcentralmag.com and we’ll get back to you as soon as we can! Please keep it in mind that any person who leaves negative, unpleasant and unnecessarily rude or derogative comments will be removed and banned from this site permanently. This is not a page where you can post your rants – we will ONLY approve comments that are constructive to the nominees. Let’s just keep this voting poll fair and fun! Korum Ellis is a high energy and charismatic performer who is currently working in the Australian film and television industry. When not working hard on screen, he is a holistic health advocate and wellness coach working closely with individuals and education programs to help people re-connect with natural organic food sources and understand how to achieve a supplement free purity of health and wellness in the modern world while recycling resources and utilising local community produce. His ultimate dream is to be able to help guide a whole new generation of healthy and active people to grow their own rich natural food sources in their homes. Justin was born and raised in a sporting environment and surrounded by good role models. He played competitive sports in his youth which was a natural progression in personal fitness and pursuing a modelling career. He currently has an obsession with improving himself, healthy living and fitness. In the beginning it was all about the girls, going out to parties and having fun with friends. His interest has now changed for the better – he’s now into healthy living, lifestyle and bodybuilding. He was inspired by great role models such as Lazar Anglov and Johnny Star whose motto is about helping others which has changed the way he now views life. He has gained confidence to get out there and pursue his dream of becoming a fitness model and also take on the world. He’s looking forward to future opportunities with a balanced physique, healthy lifestyle living, fitness and definition. Alexandre is a fashion photographer. He’s also appeared in a few Spanish films and TV shows and he loves the excitement surrounding the entertainment industry. Chris is 31 years old and he was born and raised in Germany near Frankfurt. He’s been a personal trainer and a motivational coach now for more than 10 years so that he can inspire people to create a fit, healthy and energetic lifestyle. He has a good sense of humour and he believes that patience and determination is the key to achieving your goals. He’s a part time model for more than 4 years and he has done a number of jobs from sports shoots to catalogue shoots to TV commercials and catwalks. He’s currently living in Vientiane in Laos in Southeast Asia, but he has lived before for a number of years in Auckland/New Zealand and Paris/France.

Vote for who you think should be the “Sexiest Man Of The Month” in the poll below! The winner will appear in our website and will be featured in our magazine. The poll closes on the 27th of May, 2014 at 1am AEST (Sydney, Australia time) and you are eligible to vote only once per day (after you’ve voted, 24 hours must pass after the time you voted, for you to be able to see the voting form and vote again the next day). Please note that voting is also restricted to just ONE vote per IP address. Vote NOW and make your voice heard! 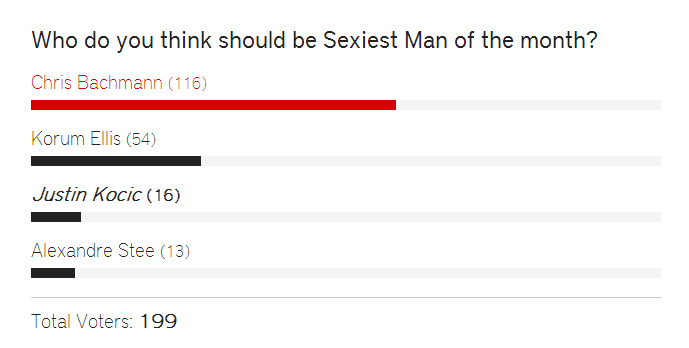