Sexiest Women Of The Month – May 2014 Edition

Vote now for who you think should be the Sexiest Woman Of The Month for May 2014! If you feel that you or someone you know deserves to be a featured as one of the Sexiest Women Of The Month then let our talent coordinator know by emailing info@starcentralmag.com and we’ll get back to you as soon as we can! Please keep it in mind that any person who leaves negative, unpleasant and unnecessarily rude or derogative comments will be removed and banned from this site permanently. This is not a page where you can post your rants – we will ONLY approve comments that are constructive to the nominees. Let’s just keep this voting poll fair and fun! Heidi Anne is a singer/songwriter and model who hails from Manchester, England. She has been following her heart for the last 5 years since graduating from university and since then she has achieved many great things to be proud of. She has recently signed a publishing deal with Nottinghill music and she is releasing a new single very soon which will be hitting the clubs. Modelling is also something she really enjoys and will continue to pursue further. Marysia was originally from the Ukraine but she is currently living in Barcelona, Spain. She started her modelling career at the age of 15 wherein she got to travel around Asia and Europe working, learning languages as well as new cultures. At the moment she is studying marketing at the university and pursuing her artistic interests that include acting, modelling, journalism and painting. In the future she wants to continue exploring the world, meeting extraordinary people and creating beautiful works of art in fashion and film. Sara is a glamour model, her range of modelling varies from fashion, swimwear, to art nude.She has been modelling for 3 years now and she has managed to build herself quite a modelling career working with few of the top photographers in London. So far she has been published in over 3 magazines whilst studying and working as a dental nurse. She has also started acting, it’s a passion that she would like to evolve into a full time career one day. Dancing is also something that she has been working on since the age of 4, she has also done gymnastic for over 10 years. Victoria Serdyuk currently lives in Melbourne, Hawthorn East and she works as an admin manager for an engineering company whilst modelling on her spare time. She likes cooking for her family and friends, reading books, travelling to different countries and spending time at the  gym. She can also speak both English and Russian fluently. Diana is a Swedish, ambitious and happy lady who is currently living in Manly. She works as a model and actress in Sydney and occasionally overseas. She loves showbiz and appreciates a good challenge. She enjoys life, living everyday to the fullest and travelling. On her day off she always goes to the beach for a run and cooks a nice dinner with dessert afterward.

Vote for who you think should be the “Sexiest Women Of The Month” in the poll below! The winner will appear in our website and will be featured in our magazine. The poll closes on the 27th of May, 2014 at 1am AEST (Sydney, Australia time) and you are eligible to vote only once per day (after you’ve voted, 24 hours must pass after the time you voted, for you to be able to see the voting form and vote again the next day). Please note that voting is also restricted to just ONE vote per IP address. Vote NOW and make your voice heard! 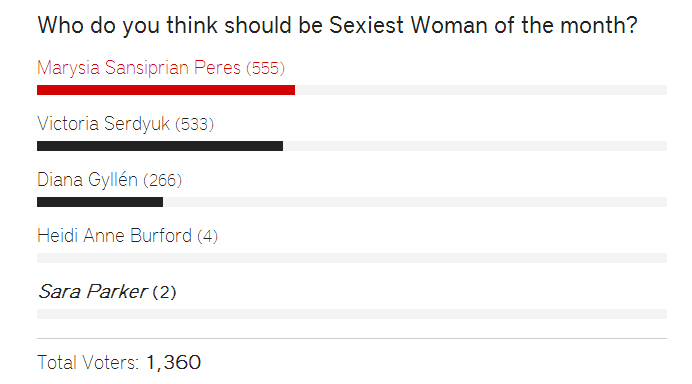