Vote now for who you think should be the Sexiest Woman Of The Month for July 2014! If you feel that you or someone you know deserves to be a featured as one of the Sexiest Women Of The Month then let our talent coordinator know by emailing info@starcentralmag.com and we’ll get back to you as soon as we can! Please keep it in mind that any person who leaves negative, unpleasant and unnecessarily rude or derogative comments will be removed and banned from this site permanently. This is not a page where you can post your rants – we will ONLY approve comments that are constructive to the nominees. Let’s just keep this voting poll fair and fun! Tiffany Crowther is a 19 year old model who is currently a full time student in college studying to become a Paediatric doctor. She works on the side for a clothing line in New York City. She’s an independent, fit, confident, and motivated individual. She loves nothing more than being outdoors whether it’s camping, hiking, fishing, or playing softball. Kate was born and raised in Russian; from the tender age of 9 she knew exactly what she wanted to do in the future. She is currently studying Drama at Kingston college and she’s on her final year. Apart from studying, she’s also a full-time model and singer. She has appeared on a number of catwalks as well as various photo shoots and music videos. She likes fashion hence the reason why she works as a PR Manager at London Fashion with Khloe Novo designer. She also likes to travel, she loves seeing and comparing how other people live in different countries. She is currently planning to go to America to further pursue her career. Caetlyn Armstrong grew up in a small town outside Melbourne called Healesville. She is a very family orientated so she’s very close with her Mum, her Dad and her two brothers. At the age of 18 she moved closer to the city to be closer to more modelling work. She has a keen passion for swimwear and glamour modelling as well as promotional or TV work. She now resides in the Sunshine Coast where she can be nearer the joy of the ocean and she has now taken up wake boarding and mountain bike riding with her husky, Kendi. She has a Malaysian background and she finds peace and happiness through family, friends, meditation, yoga and healthy eating. She owns her own business in Personal Training with a Diploma of health and fitness and her dream is to build her modelling career along a busy and successful high heel and swimwear store. Anastasia was born in Russia, Moscow but she moved to New Zealand 10 years ago – she has lived in Auckland ever since. She is currently 23 years old; she’s a beauty therapist by trade but also works as an event coordinator for a sales company. She enjoys snowboarding, camping as well as any outdoor activity. She got into modelling 4 years ago which she thoroughly enjoys and she would really love to progress her career and go international one day.

Katie Isabelle is a 21 year old model who hails from Brisbane, Australia. She’s a model, actress, dancer, personal trainer and fitness enthusiast. She loves to travel, hilarious people, food, fashion, photography, art and fine food. She also loves to practice and preach healthy body, healthy mind and healthy soul. Her ambition in life is to train, empower and inspire different types of women from all over the world. She wants to change the way women think, feel and live.

Vote for who you think should be the “Sexiest Women Of The Month” in the poll below! The winner will appear in our website and will be featured in our magazine. The poll closes on the 29th of July, 2014 at 1am AEST (Sydney, Australia time) and you are eligible to vote only once per day (after you’ve voted, 24 hours must pass after the time you voted, for you to be able to see the voting form and vote again the next day). Please note that voting is also restricted to just ONE vote per IP address. Vote NOW and make your voice heard! 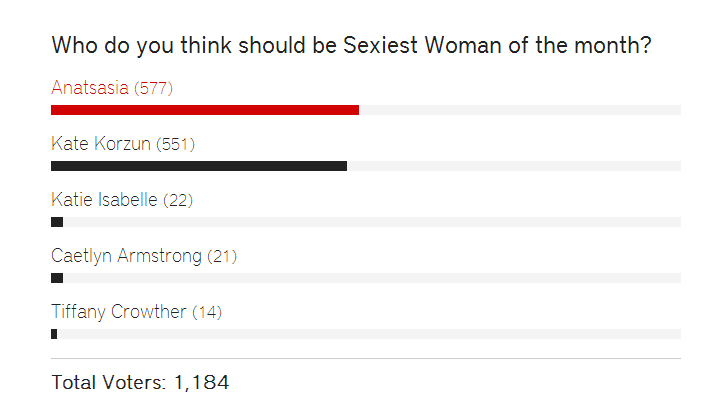