Vote now for who you think should be the Sexiest Woman Of The Month for September 2014! If you feel that you or someone you know deserves to be a featured as one of the Sexiest Women Of The Month then let our talent coordinator know by emailing info@starcentralmag.com and we’ll get back to you as soon as we can! Please keep it in mind that any person who leaves negative, unpleasant and unnecessarily rude or derogative comments will be removed and banned from this site permanently. This is not a page where you can post your rants – we will ONLY approve comments that are constructive to the nominees. Let’s just keep this voting poll fair and fun! Misty is one of those people who are shy at first but once you get to know me her you will grow to love her for her lame jokes and her sense of humour . She loves animals, shopping, fitness and the ocean. Things she enjoys doing that not many people know are playing video games, attempting to ride her skateboard, fishing as well as taking selfies! Renae is an artist who loves being involved in anything creative. She paints large, colourful oil on canvas textural pieces to liven up any space. She also models for various fashion brands and creative themed projects. She loves skateboarding along the Port Melbourne to St Kilda coastline nearly every day and she loves the outdoors as well as yoga. Her Fb page is for her latest projects as well as to inspire others especially women to be the best they can be. Michelle Alexandra Wistuba is a 19 year old Finnish/Latina model who is based in Canterbury, New Zealand. She moved from her home country, Finland to New Zealand 11 years ago and she has been brought up as a kiwi.  She’s half latina from her father’s side but she speaks fluent Finnish and Swedish. She’s also a passionate freelance makeup artist. She loves to spend her spare time chilling out to music, watching movies, making art, going to pole classes as well as keeping a fit and healthy lifestyle. She loves travelling and can’t get enough of it. In fact, she has travelled to a number of countries already. Rachel Williams is a 22 year old dancer. Modelling is something she has been interested in for a number of years. Being a dancer has given her a lot of confidence in front of the camera and she loves trying new things. She loves spending time with her friends in her spare time, going for meals or to the pub or on a night out. She’s a very family orientated girl and she feels very lucky to have amazing family and friends.

Vote for who you think should be the “Sexiest Women Of The Month” in the poll below! The winner will appear in our website and will be featured in our magazine. The poll closes on the 26th of September, 2014 at 1am AEST (Sydney, Australia time) and you are eligible to vote only once per day (after you’ve voted, 24 hours must pass after the time you voted, for you to be able to see the voting form and vote again the next day). Please note that voting is also restricted to just ONE vote per IP address. Vote NOW and make your voice heard! 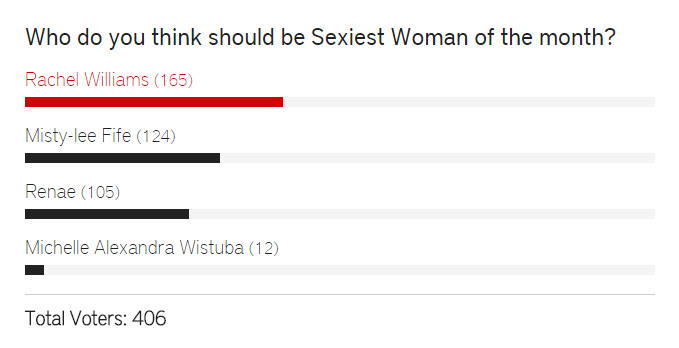