Vote now for who you think should be the Sexiest Woman Of The Month for October 2014! If you feel that you or someone you know deserves to be a featured as one of the Sexiest Women Of The Month then let our talent coordinator know by emailing info@starcentralmag.com and we’ll get back to you as soon as we can! Please keep it in mind that any person who leaves negative, unpleasant and unnecessarily rude or derogative comments will be removed and banned from this site permanently. This is not a page where you can post your rants – we will ONLY approve comments that are constructive to the nominees. Let’s just keep this voting poll fair and fun! Delaney Bertrand is a  21 year old model who hails from Auckland, New Zealand. She is of Zambian, Maori and French descent. She has been modelling since she was 13 and even though she has two slipped discs in her back, nothing could stop her from doing what  she loves. She also loves animals as well as socialising with other people. Clare Mortimer is currently 21 years old and her goal in life is to become a positive healthy role model to all women around the world. Jannah was born and raised in Australia and she has been lucky enough to see some parts of the world but she still believes there’s so many more beautiful places to see. She was brought up on a hobby farm just out of Perth Western Australia hence the reason why she’s very down to earth and not afraid of some work or getting dirty. She loves catching up with friends, wake boarding and discovering new things to do.

Vote for who you think should be the “Sexiest Women Of The Month” in the poll below! The winner will appear in our website and will be featured in our magazine. The poll closes on the 29th of October, 2014 at 1am AEST (Sydney, Australia time) and you are eligible to vote only once per day (after you’ve voted, 24 hours must pass after the time you voted, for you to be able to see the voting form and vote again the next day). Please note that voting is also restricted to just ONE vote per IP address. Vote NOW and make your voice heard! 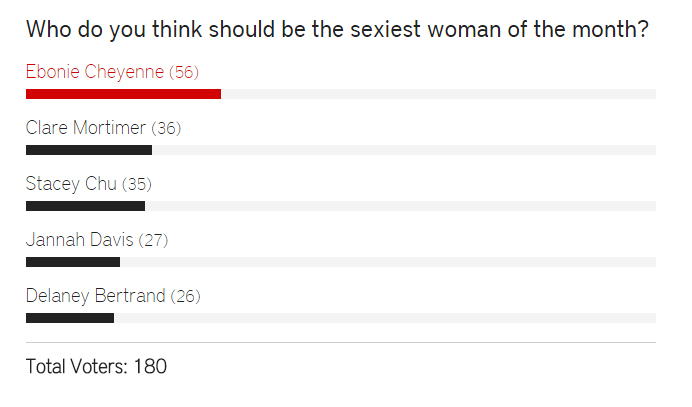