Ruve Staneke is an artist whose work attempts an explanation on the perception of  life and all its physical, mental, psychological, and spiritual realms. Through her work, Ruve aims to challenge the viewer, asking them to ‘look deeper’ into their own life, into their ‘calling’, questioning them as to whether they are living to their potential, or simply just being. 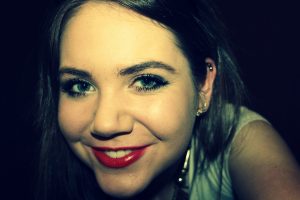 In her own words, Ruve explains, “My work is the exploration of the inner self, that little voice buried deep inside us that emanates questions that we seek answers to, but cannot seem to find.  I work on a large scale, using oil paint, canvas, paper, and graphite. I work from photographs that I have taken myself, so that the work is wholly my own. My subjects consist usually of my sister, brother, myself, and the physical places that surround me. “ 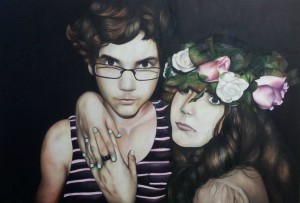 Ruve has always had a passion for art and at the beginning of 2013, she relocated to Sydney to begin university, undergoing a degree in Bachelor of Design in Fashion and Textiles.  Although she enjoyed the course, she withdrew after 6 weeks.  Ruve wanted to have time to create art, without having the constant stress of university assignments.   “Withdrawing was the hardest thing I have had to do so far this year, because there was so much contradiction and conflict, in myself, and between my family and friends. Leaving university went against all expectations my friends and family had, and even what I believed of myself. “ 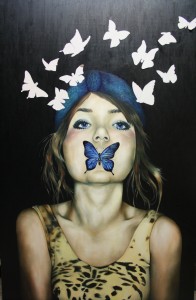 Ruve came across Chic Petite Events and decided that she would like to take part in one of their exhibitions. Since withdrawing from university, she now had the time to focus on her own work for submission to such events. Ruve plans to include at least seven pieces of her work.  This process is still quite difficult as Ruve explains,  “Due to the detail and large scale of the works, they become mundane for me to look at, so I get annoyed at them, which doesn’t help the process of finishing them…I wanted this body of work to revolve around the unknown – my world at the moment is no longer scheduled by school, exams, or university assignments, but it is ever changing and spontaneous. I am attempting to explore the uncertainties of what we call ‘the future’ through this collection.“

Ruve’s future is filled with possibilities and different goals.  From wanting her own fashion label, where her clothes are adorned with prints of her own artworks, and the dream of being in a film one day, her main goal at the moment is to decide on what career path to take and a lot of that will depend on how her works are received at the exhibition.