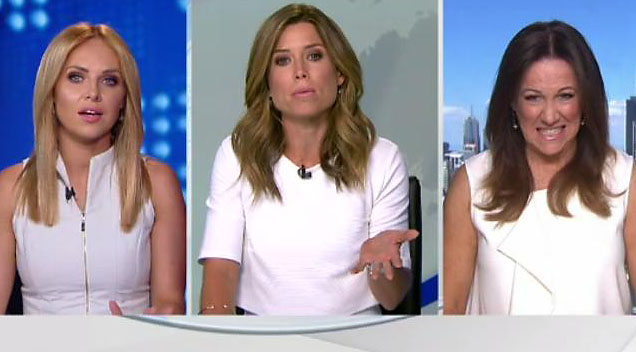 This off-air footage of a wardrobe row between two Nine News presenters has gone viral and for good reason.

Minutes before going live, Nine newsreader Amber Sherlock caught a glimpse of the video feed in the studio monitor and instantly became conscious that her, another Nine presenter Julie Snook and guest psychologist Sandy Rae were all wearing white. Since this could very well be a fashion disaster, Sherlock immediately demanded that Snook “put a jacket on.”

Snook responded by explaining that she just hadn’t had time to find a jacket before going into the studio, but then Sherlock just bluntly responded by saying “Come on, I told you two hours ago.”

Guest psychologist Sandy Rea managed to hear the wardrobe row from her studio and as expected, she looked totally uncomfortable about the fashion emergency.

Snook eventually said “Amber, if it’s an issue I can get on out of here” to which Sherlock snappily retorted “It is an issue. Go and grab a jacket.” Snook tried to even point out that she actually wasn’t wearing white, she was in fact wearing light blue but then Sherlock didn’t want to hear about any technicalities – she just wanted results.

Scroll down to watch the cringeworthy feud below courtesy of Daily Mail and trust us, the ending will definitely surprise you.