Top 10 internet scandals that has rocked the Philippines

Mariel Rodriguez is a well known commercial model, TV host and actress. She got famous for being the host for “Pinoy Big Brother” and “Wowowee” – as well as for that racket she calls her “singing voice” which she unleashes to Wowowee audiences every now and then. Now the scandalous photo I’m referring to was taken when she was with fellow actress Ms. Toni Gonzaga. The photo was taken by a fan wherein she was pictured wearing a two-piece bikini – and her NIPS were showing! I’m not sure if the photo was actually doctored or not, but it did make headlines when it was first leaked out though.

Angelica Panganiban is a famous ABS-CBN talent who has been featured in several TV shows and movies including the sexy comedy “Banana Split” and the box office hit “A Love Story.” The photo scandal I’m referring to, actually pertains to a set of calendar photos leaked all over the internet which were photos taken from the dressing room prior to her photo shoot. The dressing room photos exhibited her natural body with noticeable baby fats, but then the final photos that came out in the calendar looked obviously photo shopped because they showed off Angelica with washboard abs! Well photoshoppping is actually a standard practice in the magazine industry, but because the “before and after” photos involved the famous Angelica Panganiban, the whole thing became a massive scandal.

Anne Curtis is one of the most sought after ABS-CBN stars who has starred in various movies and TV shows including her sizzling role in the TV series “Diyosa” and her role with Aga Muhlach in “When Love Begins.” Richard Gutierrez on the other hand is one of the most sought after GMA stars who’s been labelled as the undisputed king of valentine films. Now as we all know, Anne Curtis and Richard Gutierrez used to be a couple. They became the subject of a scandal after a short video from Anne Cutis’ mobile phone showing the couple in bed and making out was leaked and made its way to thousands of inboxes all over the Philippine. Anne Curtis even admitted to the video saying “I don’t see the point of not admitting it; I’ve never been the kind of person to deny anything. I would just look like a liar.”

Pauleen Luna is an actress and TV personality who is well known for her role in the movie “Blue Moon” and as one of the hosts of Eat Bulaga! Just recently, a photo was taken of her in a very innocent two-piece bikini – little did she know that something sinister was peeking through her underwear! We can’t actually reveal the scandalous area in her underwear, but if you use your imagination you’ll catch my drift!

6. Manny Pacquiao Scandal at the Embassy

Now who doesn’t know Manny Pacquiao? He’s one tough dude since he’s arguably the best pound per pound boxer the Philippines has ever produced. And since he is the “Pambansang Kamao,” it’s inevitable that his private life gets scrutinized by the paparazzi. Manny is used to knocking down his opponents – but this time round, he’s knocked out a different opponent altogether!

Back in 2007, Manny was actually linked to super hot babes Ara Mina and Valerie Concepcion, but since that issue was back in 2007, it has of course met a natural death. Now the Embassy scandal was about a set of photos that have been leaked in the internet showing the “people’s champ” drunk, kissing and flirting with a girl at the Embassy. Of course, this set of photos was able to make its way into the inbox of millions of Filipinos all over the world! I only have one thing to say about this – the champ sure knows how to pound his way into a woman’s hearts!

Criselda Volks is famous in the Philippines for her sexy roles in “bold” movies. When a sex video of her was leaked in the internet around October last year, the video immediately became one of the hottest scandals at the time. And apparently it wasn’t just a one time video – it was a four part series!

The top 4 sex video scandals to rock the Philippines of course belongs to none other than sex video king Hayden Kho – who has been known and SEEN to bed some of the hottest women around. Hayden is your normal good looking and mild mannered surgeon by day, but he is “Hayden the Hyper Humper” sex video king by night! And in this specific scandal, the gorgeous Mariana del Rio was actually one of his victims. Mariana a Filipino-Brazilian Model who came to the Philippines from Sao Paulo Brazil to try her luck on Philippine showbiz. She has been on a number of print ads, and TV commercials but most significantly – Mariana del Rio is the third woman in the Hayden Kho’s sex video series!

Now last year when Dra Vicky Belo and Dr. Hayden Kho finally called it quits, Rufa Mae Quinto’s name was repeatedly brought up in the equation. Rufa Mae was adamant though that she was never involved with Hayden Kho in the first place. However, a video was leaked in the internet showing Rufa in all her naked glory whilst she’s listening to her Ipod. It’s still unclear if Hayden was indeed the person on the other end of the camera though since we all know that he likes to actually star in his own videos. A word of warning to Rufa – maybe it’s best to listen to your Ipod with some form of clothing on and no one is video taping you but naked! Maybe …

Maricar Reyes is a model-turned actress and is well-known for playing John Lloyd Cruz’s girlfriend in the drama series I Love Betty La Fea. Now of all of Hayden Kho’s sex videos, Maricar’s sex clip was probably labelled as the most action-packed of them all. The video is a whopping more than 40 minutes long! Now that’s a sex video!

The first 30 minutes of the video were mostly chit chat, the video bears witness to  Maricar Reyes and Hayden Kho having a meaningful conversation about life and about love. They were probably talking about medicine and the economy … Yeah right! Next thing you know their clothes were off and they’re both ravishing each other like a pack of hungry dogs! 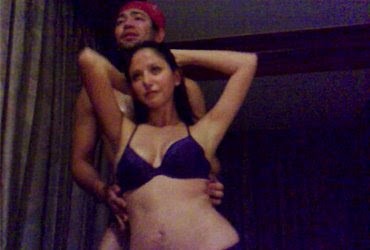 Was there ever a doubt that the Katrina Halili and Hayden Kho Sex Video Scandal will top this list? Hayden Kho is a renowned surgeon and a talent artist of GMA Network whilst Katrina Halili is one of the sexiest creatures in the Philippines. She was originally a StarStruck talent to begin with, but then proceeded to become a popular actress and a cover girl of popular magazines such as FHM and Maxim Philippines. She was voted as FHM Philippines’ sexiest woman for the years 2006 and then again in 2007 – she’s also a three-time FHM Philippines cover girl.