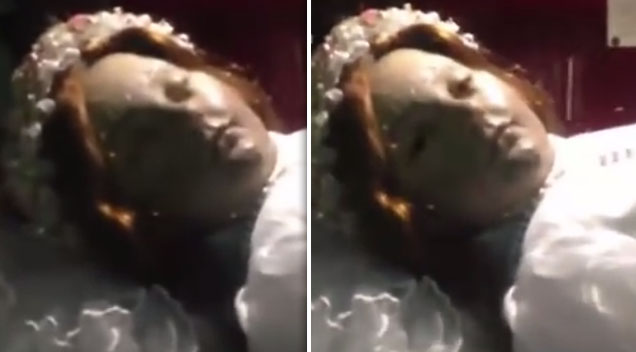 The corpse of this child saint suddenly opened her eyes and she has been dead for around 300 years.

Yes, you read that right.

Just a bit of background regarding this child saint, St Innocence apparently took First Communion with the rest of her classmates 300 years ago which her father was not happy about. So what did he do? He ended up stabbing her to death. Yep, we know, what a nutcase!

She was eventually treated with wax to preserve her body and then she was laid to rest in Mexico at the Cathedral of Guadalajara.

Just recently a visitor visited the Cathedral and this person decided to film the child saint’s corpse for some strange reason. He/she wasn’t anticipating that he/she would catch the corpse opening her eyes even though she has been dead for around 300 years!

Check out the eerie video below (source: BE-News):