This Man Actually Punched A Kangaroo To Save His Dog From Being Strangled (Yes, You Read Right) 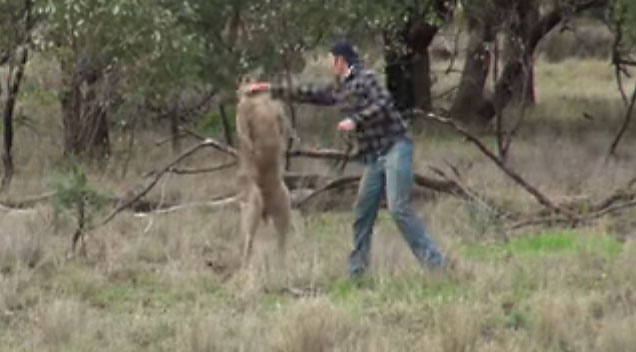 What would you do if you see a kangaroo strangling your pet dog?

In this video taken by Greg Bloom in an Australian Outback, a kangaroo was filmed strangling a dog. Since we all know how tough a kangaroo can be because they can pack a mean punch and their gigantic feet can crush bones, the dog didn’t stand a chance.

When zookeeper Greig Tonkins saw what was happening, he decided to approach the kangaroo to save his dog. The Kangaroo eventually released his dog as Greig drew near and that’s when he and kangaroo squared-off in their respective fighting stances almost immediately. Greig punched the kangaroo first and he landed a solid hit to the kangaroos jaw – and it was ON.

Check out the video below (credit: Viral Hog):