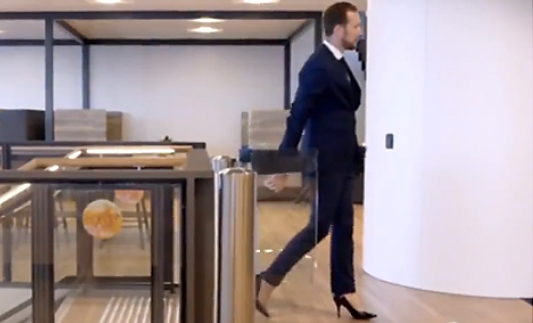 No man can be fiercer than this Aussie businessman in the corporate world.

Ashley Maxwell-Lam may look like the typical businessman with a suit and tie, but it’s his high heels and towering height of six foot that makes him the fiercest looking businessman in Australia!

Ashley got the idea of wearing high heels from a tall female colleague who said that heels empowered her. When he was interviewed by The Project, he said: “So I went to a shoe store, tried them on and it was as if a lightbulb just switched on.

“I felt confident, I felt invincible, I felt empowered, like I could take on anything and do whatever I wanted.

“I knew I was going to wear them to work, so I wasn’t really asking permission, I was telling her ‘this is what I’m doing’, but it was a little bit scary.

“A lot of people have a work identity and then a home identity, but I don’t feel the need to be different in the office.”

He further said “It acts as the best icebreaker, if I know I’m going into a meeting with new business partners or stakeholders, I’ll generally make sure I wear an outfit where I can put my heels on… I don’t want to be a woman, I love being a man. I just love the complete contrast between masculinity and femininity. It makes people question things, just because he’s gay and wears nails doesn’t mean he doesn’t know how to use a chainsaw… My mother taught me to be resilient — I have a thick skin. You have to take the good with the bad; you do get people who look at you with disgust but mostly it’s curiosity.”

Ashley admits that he now owns nine pairs of heels – four of which he wears for work and five for pleasure.

More power to you Ashley – what a brave soul!