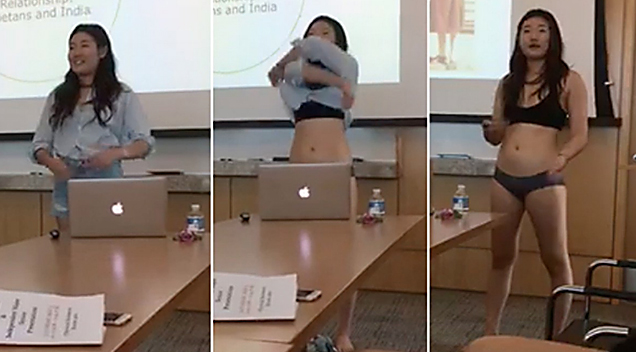 A university student made a massive statement in her class by stripping down to her underwear after her professor criticised what she wore.

Letitia Chai was about to present her practice presentation for her senior thesis when her professor apparently commented on her style – she was wearing a button-down shirt and denim cut-off shorts at the time.

“The first thing that the professor said to me was ‘is that really what you would wear?’” Letitia revealed to the campus newspaper the Cornell Daily Sun. “I think that I was so taken aback that I didn’t really know how to respond.”

She was reportedly told that when giving a presentation, the clothes worn by the presenter should make a ‘statement.’ She was also apparently told that her shorts were ‘too short’ and that her outfit was inviting the “male gaze.”

Letitia left the classroom after hearing her professor’s comments but then returned to strip off her clothes and give her practice presentation in her underwear.

She then wrote a Facebook post about what happened to her which went viral, and then she invited everyone to join her for the actual presentation.

Check out her presentation below courtesy of CCTV News: