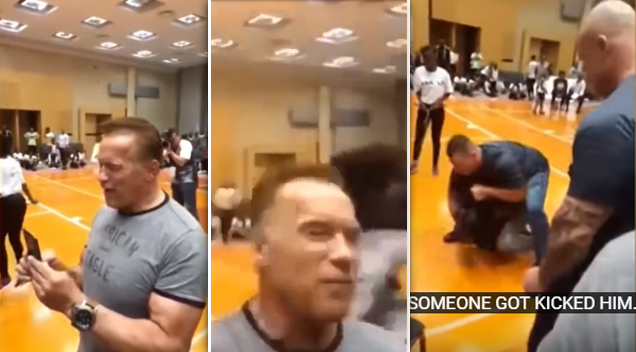 Arnold Schwarzenegger may be 71 years old, but he is still solid as a wall!

An unfortunate incident recently happened in South Africa while Schwarzenegger was taking a Snapchat video with fans at a bodybuilding event held in Johannesburg called the Arnold Classic Africa.

Out of nowhere one of the attendees leaped at Schwarzenegger and tried to kick him n the back. But instead of hurting good old Terminator, he didn’t even bat an eyelid – what a legend!

Here’s what he said via Twitter: “Thanks for your concerns, but there is nothing to worry about. I thought I was just jostled by the crowd, which happens a lot. I only realized I was kicked when I saw the video like all of you. I’m just glad the idiot didn’t interrupt my Snapchat.”

Check out the video below courtesy of CBS Los Angeles: