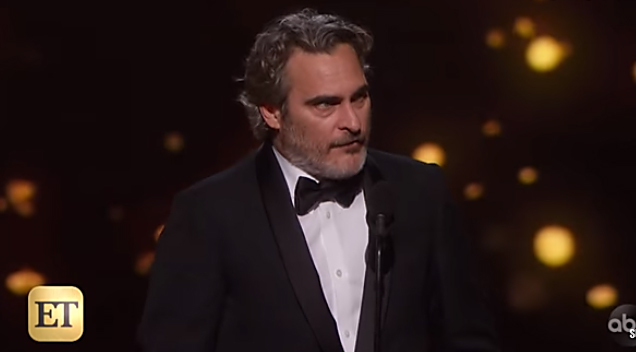 Joker star Joaquin Phoenix has just won the best actor Oscar at the 92nd Academy Awards, for his performance as the Joker – he pretty much made a clean sweep of all the major awards for the best actor role, winning best actor in a drama at the Golden Globes, best actor at the Baftas, the Critics’ Choice as well as the Screen Actors Guild awards.

Joker has previously been played by Jack Nicholson and Heath Ledger but Phoenix’s version is much different – his version is an aspiring standup comic who has a disorder that causes him to burst into uncontrollable laughter at weird moments. In an emotional acceptance speech, Phoenix emphasised on the cruelty involved in industrial dairy farming and also quoted a lyric written by his late brother, River: “Run to the rescue with love and peace will follow.”

Check out the video below courtesy of ET: