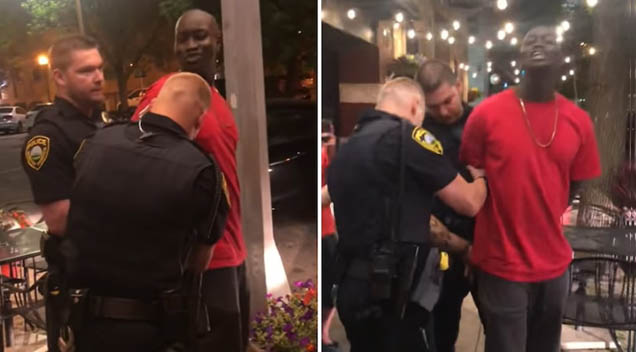 Just a year before the death of George Floyd, another black man found himself wrongfully getting handcuffed by Minnesota police officers but there’s a twist to this story – this man had connections higher up.

The video clip shows a black man being approached by two white Minnesota police officers who pretty much placed him in handcuffs straight away because apparently he “looked” like someone who had a warrant.

“You are racial profiling,” the man told the officers on the video. “You are assuming I am someone that I am not.”

The footage was captured by a bystander outside a bar on Historic Third Street about a year ago. It shows the man smoking a cigarette outside the pub and for the first 30 seconds, the man repeats multiple times that he is not the person police are looking for. “You guys are harassing me,” he stated.

The police officer responded by telling him that he is “not free to go.”

“Am I being detained?” the man asked.

“Yeah, you are,” the officer responded.

“Because I think you have a warrant.”

“That’s an illusion. You think.”

“Alright, stand up and put your hands behind your back.”

The officer then tried to pull his arm up, soon enough a second officer came in and helped to raise the man out of his seat. As the police officers lifted the man up, he kept saying: “I am not under arrest. I do not have a warrant.”

Once handcuffed, he eventually told the officers to “look at my ID,” where they eventually discovered that he has connections in the government. The officers soon realized they made a mistake then removed the man’s handcuffs.