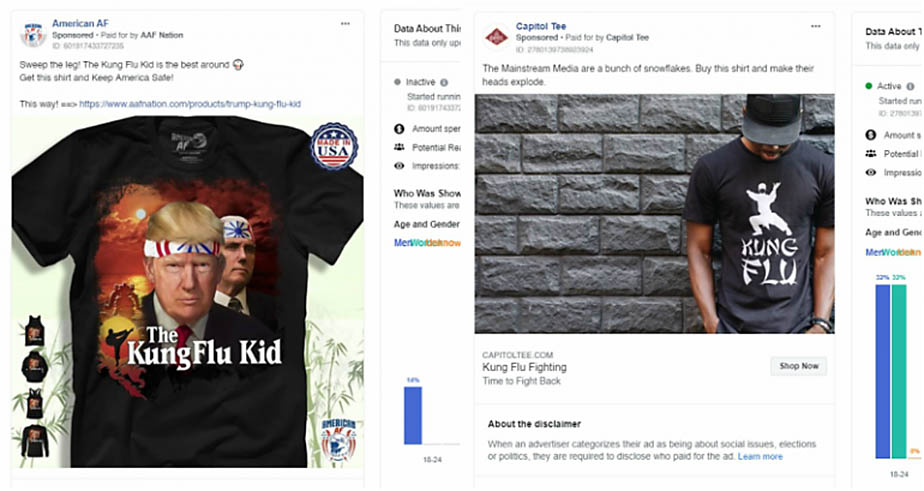 Although Facebook has recently enforced their ‘discriminatory practices,” by prohibiting the term “Kung Flu” used in adverting recently, there have been reported incidences where the social media platform has run ads that has the racist term.

The term, ‘Kung Flu’ was coined by President Donald Trump, who no stranger to racism and bigotry when discussing the ongoing coronavirus pandemic. Press secretary, Kayleigh McEnany has defended the use of the term by claiming that is a ‘criticism to China.”

The virus originated from Wuhan, China in early January of this year has swept the United States of America into a frenzy. Unfortunately, the reference to its origin has caused harmful consequences for Asian- Americans. There have been reports of Asians being the subject of hate crimes during the pandemic.

According to Andy Kang, an executive director of the civil rights nonprofit Asian- Americans Advancing Justice of Chicago, Trump’s racial charged slurs and bigotry will result in dire consequences.

“With such an emotionally charged political atmosphere, it’s irresponsible and reckless for our political leaders and candidates for our nation’s highest office to engage in rhetoric that incites xenophobic scapegoating and violence.”

Media matters search for the term, “Kung Flu” in Facebook’s Ad Library and found that they do accept the term.

A prime example is a conservative clothing company; Capitol Tee has advertised a stock image of someone wearing a T-shirt that says “Kung Flu “shirt, with additional text that states: “The Mainstream Media is a bunch of snowflakes.” Facebook and Instagram ran an ad with a shirt that reads ‘Tired of the Wuhan Flu?”, which has been revoked.

Another example advertised clothing company, American AF, which has a picture of a shirt of Trump and Vice President Pence that has the caption, “The Kung Flu Kid.” (The company has a large customer base of 1.3 million Facebook followers and over 550,000 Instagram followers.) Also, the merchandise, Facebook has featured an ad in March where Trump is fighting Coronavirus as “the Kung Flu Kid,” which labeled as Chinese Flag.

Despite recent efforts to implemented policies to rid the platform of discriminatory advertising over the years, there is an increasing hesitation from companies to place their ads on the platform to prevent hate speech and bigotry advertisements.