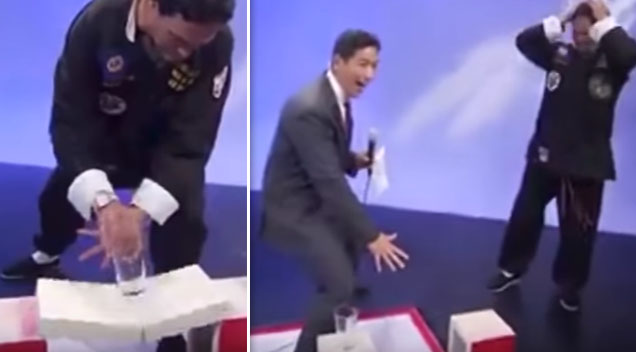 This TV reporter was in the middle of featuring a martial arts demonstration on a Hawaii news morning show when he accidentally exposed a fraud – the funny thing is, the “grandmaster” continued his performance and acted as if nothing happened at all.

Bruce Silva is a martial arts grandmaster who was doing a live demo for a local a Hawaii news morning show – he was demonstrating his skills in breaking. He started his demonstration by using a glass to break a 21 pound concrete slab. After the demo reporter Steve Uyehara then walked over to the where all the other concrete bricks were positioned for the next demo and when he touched one of the bricks it just fell apart! Needless to say, the grandmaster was left with a red face.

Check out the cringeworthy video below (credit: suboloc):