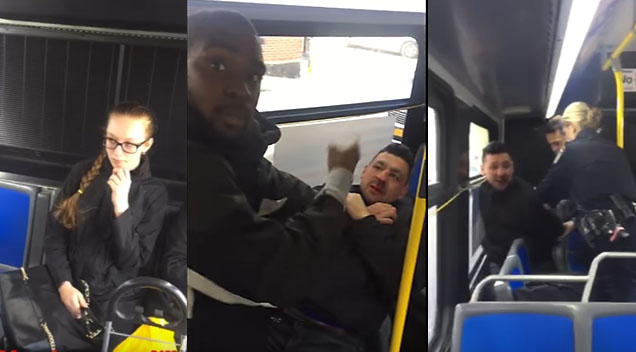 This New Yorker became a hero after he apparently saved a 15-year-old girl from being sexually harassed by a drunken man.

When Moise Morancy saw that the drunken man was getting wayyy too close to a teen sitting next to him, he decided to pin the pervert against a seat before conveying a chilling message. He said “don’t ever do that sh*t again.”

According to Moise: “At first he started caressing her hand and I saw how uncomfortable it made her…so she let go and put her hands in her pocket. He then proceeded to forcibly do it again. In the process of doing so, he hit my knee and I told him ‘Yo, bro. Don’t touch me.”

The Independent further reports Moise then said that the suspect, Pablo Levano attacked him with racial abuse and then he started stroking the girl’s leg. When the accused reached into his pocket to get something that’s when he decided to take action by hitting him in the face, knees and neck.

Police officers eventually entered the bus detaining both Moise and Levano but then according to local TV station Pix11 Moise was later released without charge but the suspect, Pablo Levano, was charged with forcible touching.

Check out the video below (credit: Negus Nation):