Taylor Swift Just Performed Her New Single At The Tonight Show. Moments Later… Everyone Was In Tears 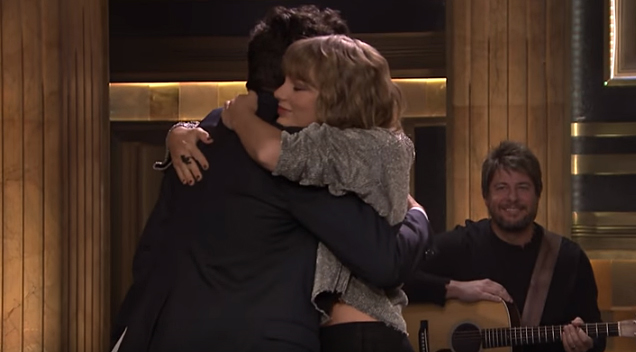 Screenshot from the Tonight Show

It was Fallon’s first night back after taking a leave due to the death of his mother, Gloria, and one of the producers has revealed the heart-rending coincidence that made Swift’s performance so touching.

When Fallon shared a moving story about his mom for his opening address, everyone was in tears. He said “She would squeeze my hand three times and say, ‘I love you’… I would squeeze back, ‘I love you, too.’ Last week, I was in the hospital, and I grabbed her and squeezed her hand and said, ‘I love you.’ I just knew we were in trouble.”

Producer Mike DiCenzo later tweeted, that Fallon’s personal story ended up becoming the lead-in to Swift’s song, which included the lyrics ‘Squeeze my hand three times in the back of the taxi.’

Fallon And Swift eventually hugged after her performance and the whole room was in tears. Scroll down to watch the touching performance below courtesy of the Tonight Show.