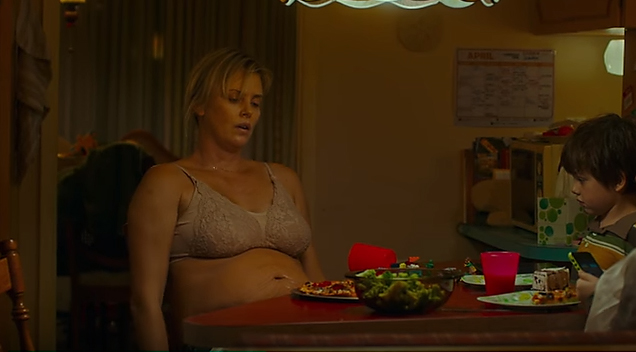 Charlize Theron plays a mum-of-three in her upcoming movie Tully, and she revealed how she had to gain a lot of weight for her movie.

Theron admitted that she literally had to keep smashing food day in day out so that she can realistically portray a role of a mum who has let herself go. Unfortunately, letting yourself go comes with consequences.

“I would literally wake up at two in the morning, and I’d have a cup of cold macaroni and cheese just next to me. I would wake up, and I would just eat it…I would just, like, shove it in my throat… I just I wanted to feel what this woman felt, and I think that was a way for me to get closer to her and get into that mindset. You know, it was a huge surprise to me,” she told Entertainment Tonight.

She further said “I got hit in the face pretty hard with depression. Yeah, for the first time in my life I was eating so much processed foods, and I drank way too much sugar. I was not that fun to be around on this film.”

Charlize also told The Advocate: “Every day was a challenge. Usually, you pick three moments in a script, and you wait for those three days to come and really stretch your acting muscles. But in this case, every scene was that scene.

“What happened was, the more I dived into her life, the more I realized that everything she did physically came from an emotional place.

When shooting for the movie eventually finished, she said she’s never been so tired. Which proves that being an actor is not a walk in a park as some people imagine it to be.