Summer may still be a few months away but that shouldn’t stop us preparing for it right? Now imagine if you can own a waterpark right in your own backyard?

Sounds impossible? We think not! Amazon is currently selling a giant inflatable ‘water park’ that can actually transform any garden into a watery battlefield!

“Suit up and prepare for battle! With 3 water-blasting cannons and 2 protective barricades, you’ll have a blast challenging your friends to the ultimate water battle. Scale up the climbing wall and take a quick shot at your opponent from the overhead water-blasting cannon before plunging down the curved slide. Run for cover behind the barricade and make your way over to one of the poolside cannons to keep the battle going. You can also challenge a friend to a game of one-on-one with the built-in basketball hoop. With the included continuous airflow blower, all of this fun inflates in less than 3 minutes. Heavy-duty Dura-Tech construction ensures lasting strength and durability. You’ll have a blast!”

The product measures at a whopping 15ft long, 11ft 10″ wide and 8ft high – so it’s a beast and a half! It also comes with three water cannons, a basketball hoop, slide, and more!

Check it below courtesy of Amazon: 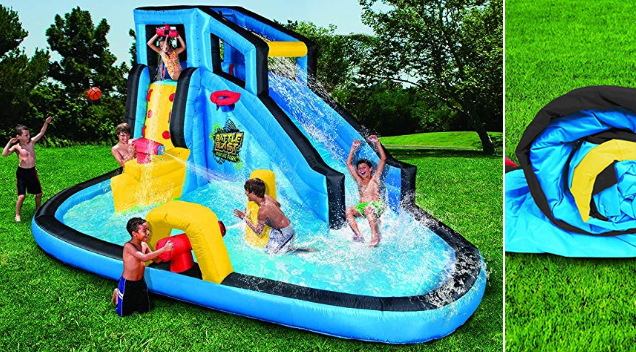