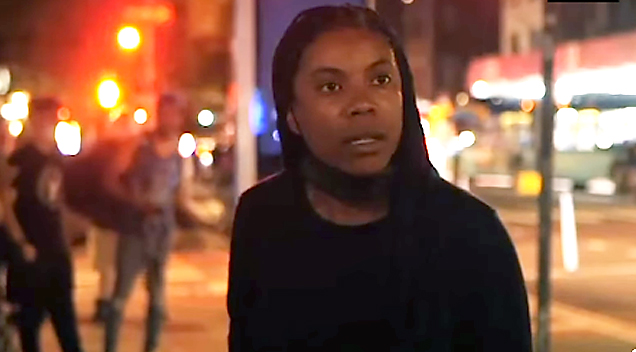 Screenshot from Now This

A New York woman’s emotional speech directed to protesters after she became frustrated with them for destroying property and looting from stores has now gone viral.

Desiree Barnes who once worked for former first lady Michelle Obama and as well as a White House press aide for Barack Obama, passionately criticized a small group of protestors as she stood on a street in New York’s East Village neighbourhood.

“These are f***ing people who live in public housing and you just made a f***ing melee,” Ms. Barnes screamed.

“You took down bus routes. There are people who live in this neighbourhood who have to go back uptown to work, and you are here profiting off of our f***ing pain.”

Ms. Barnes strongly pointed out to the protesters to think about their actions before destroying properties, because the people living in that neighbourhood now have “sh*t to walk through” in order to get to work because of what they’ve done.

“You can protest all you want but the sh*t I just saw take place.

“I know there are people out here, homeless people who f***ing rely on those banks to charge their phones. And you think it’s okay to take down a neighbourhood. You don’t see corporations here. There are human beings that live in this goddamn neighbourhood.

“I gave my f***ing blood, sweat, and tears for this country … so when you think about this anger and this rage, every single one of you better be registered to vote.

“I don’t care how you decide to organise and protest but you don’t f***ing riot, you don’t burn sh*t in my goddamn neighbourhood.

“So you wanna f***ing do something? Make sure you’re registered to vote. Don’t start another goddamn fire and you better pass it on to all your friends. You stay out of our f***ing neighbourhood. Take it to the corporations, take it to Wall Street but don’t come on this block.”

Check out the entire video below courtesy of Now This: