Vote now for who you think should be the Male artist of the year for 2012! If you feel that you or someone you know deserves to be a featured as one of the male artists of the month then let our talent coordinator know by emailing eileen@starcentralmag.com and we’ll get back to you as soon as we can! Please keep it in mind that any person who leaves unpleasant and unnecessarily rude or derogative comments will be removed and banned from this site permanently. Let’s just keep this voting poll fair and fun! 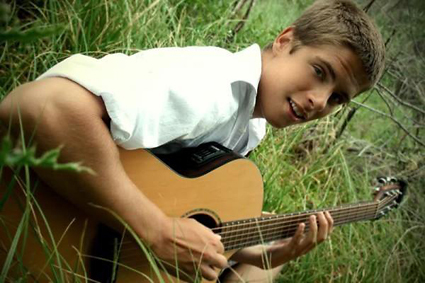 Kayleb James is a 21 year old acoustic artist who hails from Central Oregon. He has a certain style that can put a smile on your face when you listen to his music, or it can be something that you might be able to relate to. He has been playing the guitar since he was a toddler and he has been writing and singing for over 3 years now. He has also collaborated with popular artists as Jack Johnson and Donovan Frankenrieter. 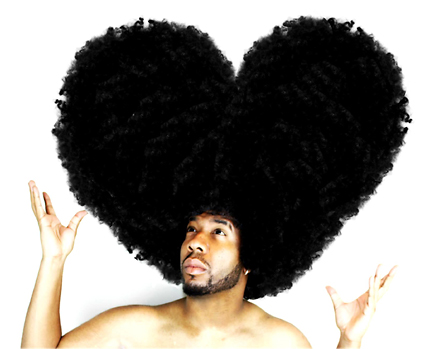 Cameron J has dedicated his life to music. While improving as a songwriter, Cameron actually grew vocally though his participation in national and regional honour choirs. He began making YouTube videos back in May 2010 and since then he has accumulated 5 Million+ views and 16,000+ subscribers! This rising YouTube sensation continues to show his creativity through various music videos, covers, choreography, and comedy skits. His talent and passion for music has also led him to release many of his own original songs online. With a core of soul and R&B, Cameron J has even branched off to try many different genres, including Pop, Jazz, Neo Soul, and even Rock. After releasing his new 80’s Pop style single “Someone Else,” Cameron has once again turned his attention towards building his online fan base.

Someone Else Music Video: http://www.youtube.com/watch?v=88WdIAIRIt8 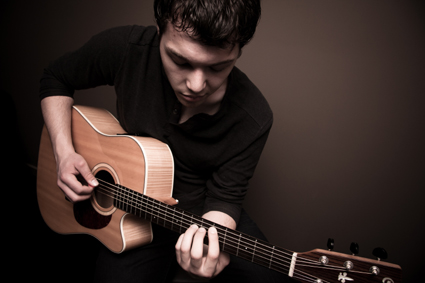 Josh been playing guitar since the age of 7 and he has been singing for as long as he can remember. He is currently 19 years old and even though he writes and records his own material, for now he only uploads covers on YouTube. Right now he has no original material on his channel because he’s waiting to get a larger following before he can finally have the courage to upload his own songs. He mainly plays acoustic, pop or rock genre on his channel. Some of his bigger influences are; Dallas Green, John Mayer, Dream Theater, Andy Mckee, Joe Pass, George Benson, Dead Letter Circus, Karnivool, Ed Sheeran, Eminem, James Blake, Steve Vai, Matt Corby, Radiohead, Silverchair as well as his very inspirational and encouraging musical family. Music has always, and will always be a huge part of his life and his dream is to perform to a sold out venue one day. 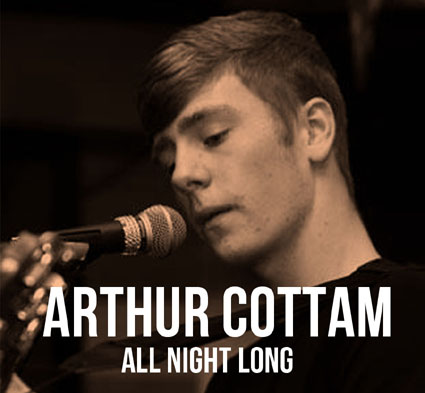 Arthur loves playing and listening to music. He usually uploads acoustic covers in his YouTube channel but sometimes he also uploads a few original songs as well. He has been playing the guitar for around 5 years now and as soon as he learnt how to play the basic chords he was singing over them. Arthur currently has over 70,000 YouTube views and over 1000 subscribers which is amazing considering the fact that he only started his channel ‘Acottam94’ about a year ago. One day he’s hoping to gig around the world and have a career in music. 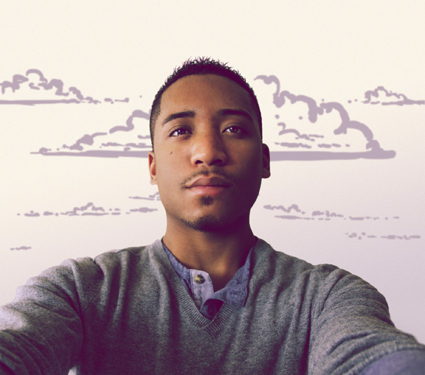 Adien Lewis is a 21 year old singer-songwriter who hails from Maryland. He writes, records and produces his own music and he has actually become well known for his big hooks and larger-than-life sound. Though many of his tracks sit comfortably in the electropop genre, Adien mixes his R&B roots with his love of dance and he usually ends up with a melodious hybrid of his biggest influences. He describes himself as “just a college kid who loves making music in his bedroom.” He started posting covers of popular songs on YouTube back in 2011 and has since amassed thousands of fans from around the world. With the release of his first EP album “Canvas”, he attracted the attention of a handful of producers and artists alike – Most notably, fellow YouTube artist Jason Chen for his debut album “Gravity”. The Adien-penned lead single “Best Friend” has gained over 6 million views to date! Adien is currently working with various artists, while writing and producing new material for his next EP album. 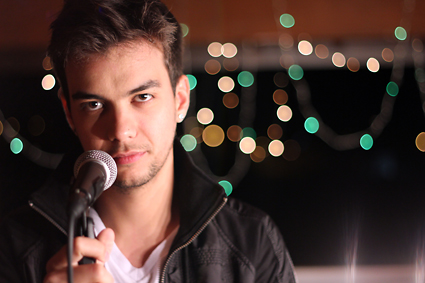 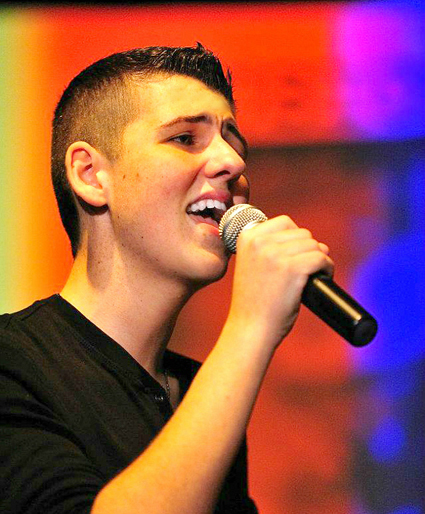 Mathew van Vooght is a 16 year old singer who hails from Delta, BC; he has been singing his entire life. He has been involved in many competitions including ‘The Whitecaps Anthem Contest’ where he was included in the final 4, also the ‘Variety’s Got Talent’ where he was included in the Top 10, and he was hailed the winner of the ‘BC Junior Talent Search’ in 2010. He is a seasoned anthem singer for the Vancouver Canadians and The Canadian Women’s International Softball Team and he has also sung the National Anthem for The Vancouver Giants. He was featured on the 2011 season of ‘The Next Star’ and music industry icon Bruce Allen has even commented that Matthew will be in Broadway one day. 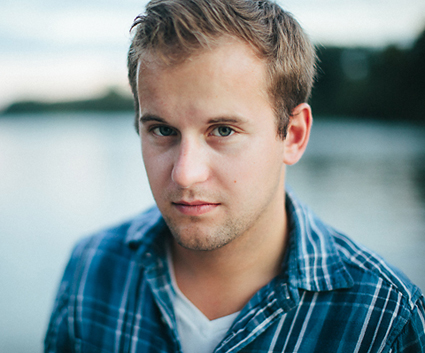 Growing up in the Lowcountry, Boone first became enamored with the sub culture of Charleston’s punk/metal scene, before eventually expanding his musical pallete to include the blues/pop-laced influences that are sprinkled throughout his more recent releases. Boone released his debut EP “A New Start” back in 2011 and in the fall of 2012 (October 9th, 2012) he will be releasing his first King City Records full-length, Changing Pace, which demonstrates a unified, confident sound that can only come from a heavy dose of touring and a band that has become comfortable exploring the boundaries of their collective sound. Opening up for such acts as Edwin McCain, Danille Howle, Mark Bryan from Hootie and the Blowfish and even Elise Testone, Boone is well on his way to becoming a major act himself. 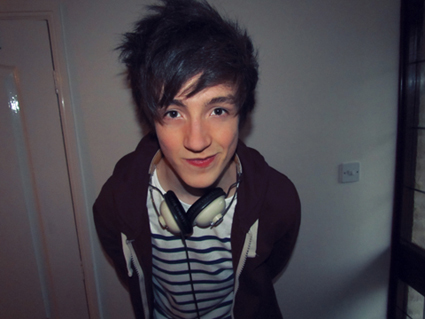 Hailing from Leeds, UK, “The Runaway State” is a one piece band that began in the early 2011. Since then their catchy, unique melodies and care-free lyrics have attracted thousands of fans from all over the world.

Vote for who you think should be the “Male Artist of the Year” in the poll below! The winner will appear in our website and the cover of our magazine along with the 2012 Hot list! The poll closes on the 29th of January, 2013 at 12am AEST and you are eligible to vote only once per day (after you’ve voted, 24 hours must pass after the time you voted, for you to be able to see the voting form and vote again the next day). Vote NOW and make your voice heard! 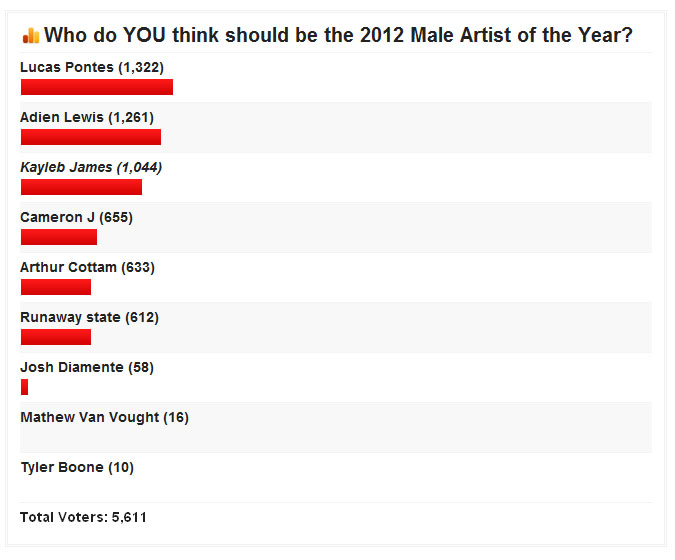